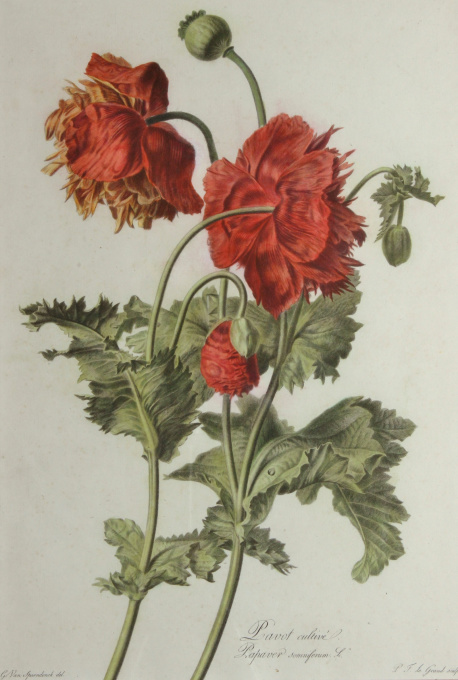 The bulb poppy has a characteristic seed bulb, which is also called the moon globe. Opium can be extracted from the dried milky sap of this moon globe. The dried seeds from the bulb are the well-known lunar seed

Pierre-François Legrand or Le Grand, was a French engraver and artist. He was born in Paris (1743) and died 'after' 1824

Van Spaendonck and Le Grand’s pioneering use of color-printed stipple engravings, which faithfully reproduced flower studies of pure watercolor, served as the prototype for Pierre Joseph Redoute’s many works. The latter artist popularized this method and the resulting prints brought his fine style of drawing to a wide audience.

Between 1799 and 1801 Gerard van Spaendonck published his famous book 'Fleurs dessinées d’après nature'. The flowers are engraved by Le Grand.

Le Grand’s ability as an artistic engraver is endorsed with this patronage by Gerard van Spaendonck. Le Grand own works (water colour) suggests that the master chose him as engraver because his art transcended that of the engraver’s craft.