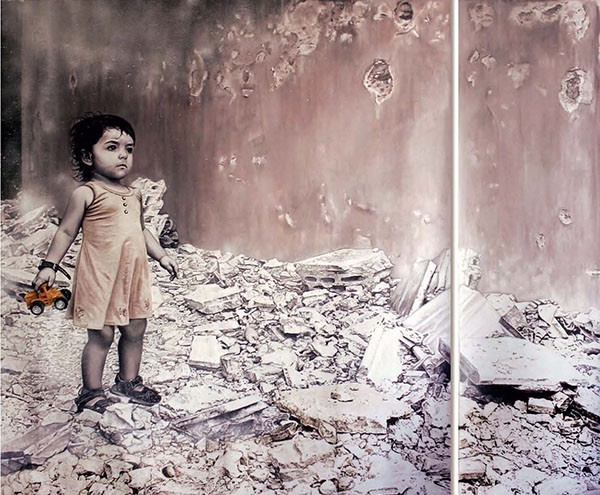 Fanny Seller is Artist and a Conservator-Restorer of wall paintings. Her work focuses on residual memory and loss. She revisits phases of her life and of her experiences, and blends memory with fiction. Rather than building, Seller’s creative process tends to deconstruct an image in order to recreate a constructed image without density but with an internal light, soft colors and simple lines. The artist’s main source of inspiration is the transformation of an image, changing their static nature into a dynamic perspective inviting to step in. Working with the development of photography, including appearance, disappearance and alteration, she creates bridges between physical and emotional realms.From her perspective, archive photography is designed as a filter. It is a hollow space that narrates a fragment of reality. These visual testimonies that she brings back to life in her work, serve as a catalyst of fantasy and memory. She preserves and reworks images, allowing her subjects to take birth again in a new frame and freeing them from their constricting narrative environment.After her degree in History of Art at the Sorbonne University in Paris, and a postgraduate diploma in Cultural Management, Fanny Seller moved to Beirut in 1997. There, she became engaged withthe conservation-restoration of byzantine icons at the Lebanese Academy of the Fine Arts (ALBA) and began teaching Art History to architects. Seller then received a graduate’s-diploma in Art Conservation and Restoration from ‘La Cambre’ in Brussels, before returning to Lebanon in 2012.At present, she dedicates herself to her artwork and leads creative workshops for young individuals entitled ‘Recycl'Art’ at the French Institute Media Library and Yoga courses in Beirut.Her studio is located in Mansion House, a collectively shared environment with 12 artists in the heart of Beirut.