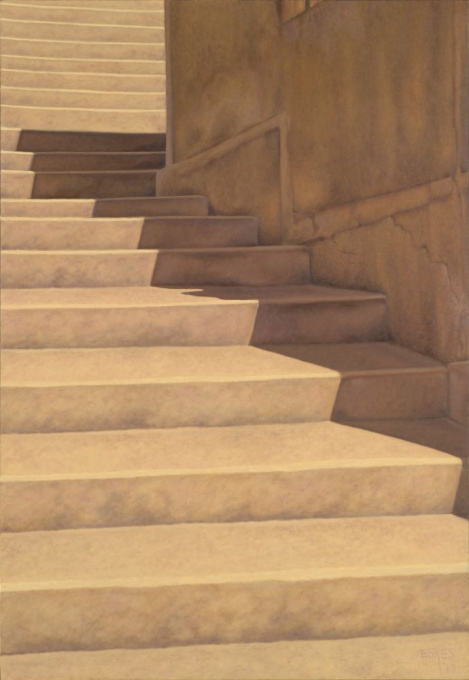 Art is about sharing and sharing is an art in itself

“I draw my inspiration from old buildings, which appeal to me, which affect me the most. Because of my search for a stilling quality in my work, I don´t want to attribute any meaning to it. I aim to take the art of leaving out to extremes. Every diversion in the work, even if it is just a blade of grass, would be at the expense of the essence that I want to depict. I don´t mean to depict reality as such, but rather the reality of a feeling. I start out concentrating on the composition, which has to have a certain expressiveness, and then I build it up layer by layer.

As the process takes it course, feeling increasingly prevails over observation.

Because balance and harmony are so important for the stilling effect, nothing in the image should form a distraction. Each stroke of paint must be placed for the benefit of what is already there. It also comes down to letting go. A painting is supposed to give me peace of mind. The process itself is very rewarding, and I am under the impression that what it brings to me can also be given to others.”

Jan Willem Eskes is a Dutch painter, born in Semarang (Indonesia) on 11 April 1956. He graduated from the art academy in Groningen in 2010. Willem Eskes creates paintings of architectural details, like a flight of steps or walls. He prefers to paint abandoned buildings and classical architecture. Eskes often paints from a low viewpoint, as seen from a child’s perspective. He also creates paintings of trees and forests in an expressionist style. Eskes always tries to convey his feelings in his work. Eskes has had various exhibitions in the Netherlands and abroad including, Groningen, Dordrecht, Coevorden, Brussels (Belgium), Milano (Italy).