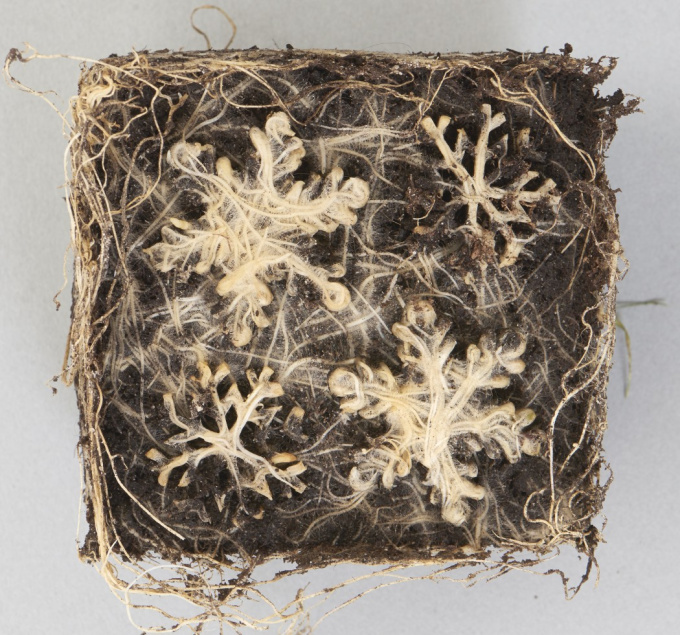 "In my photographic work I explore the relationship man has with his natural environment and his desire to control nature. For the past few years my fascination has mainly been focused on the dynamics of underground plant parts. I’ve been captivated by the root system, with its hidden, underground processes; it is considered to be the brain of the plant by plant neurobiologists. Charles Darwin was the first to watch the behaviour of plant roots. In his book The Power of Movements of Plants, he describes how roots do not passively grow down, but move and observe. A root navigates, knows what’s up and down, observes gravity and localizes moisture and chemicals. Darwin discovered that plants are a lot more intelligent, than everybody thought. For contemporary botanists, this buried matter is still a wondrous land. There is a global investigation to discover this hidden world. I also want to explore it and apply the ‘intelligence’ of plants in my work. I approach the root system as if it were yarn. For example, the refined, white root structure of grass reminds me of silk and the powerful, yellowish strands of the daisy I compare to wool. Harvest – Exercises in root system domestication is a continuation of my earlier work on plant roots."

Diana Scherer, born in Lauingen (Germany) and studied Fine Art and Photography at the Gerrit Rietveld Academy in Amsterdam. Since 2001 she has been living and working as a visual artist in Amsterdam.
Scherer has shown her work in solo and groupexhibitions in Paris, Hyeres, Amsterdam, Berlin and Seoul among others.Her work was awarded with the Gregers Nielsen Award of the Brandts Museum of Photography, Denmark and nominated for the photograpy competition Hyeres 2008.
Between 2001 and 2008 she received several grants from the Netherlands Foundation for Visual Arts, Design and Architecture. Her work has been published in Harpers Bazar Korea, Capricious, Catalogue Dutch Insight and Freeeyemagazine among others.