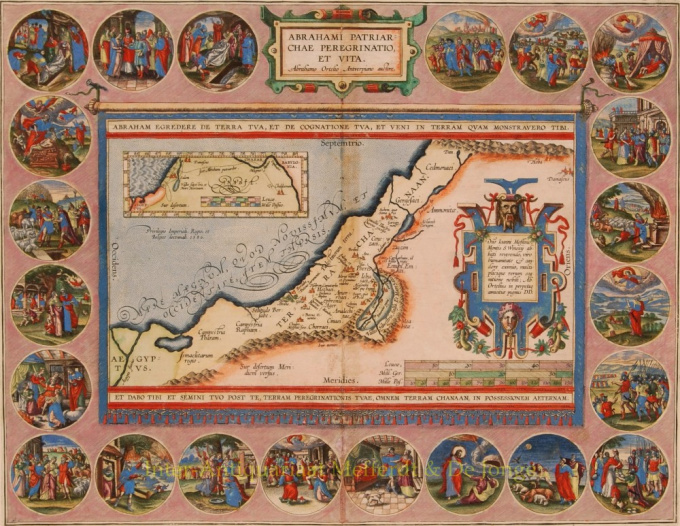 During the sixteenth century in the Low Countries, while Gerard Mercator was the preeminent cartographical innovator and draftsman, his friend and rival Abraham Ortelius became the most important map and atlas publisher. Ortelius’ atlas Theatrum Orbis Terrarum, revolutionised geographical publishing. As he expanded it in subsequent editions, he included a number of maps important to the history of mapping the Holy Land; one of which being this beautiful map surrounded by vignettes of the life of the Patriarch Abraham.

The map became part of the expanding supplement of historical maps, entitled the Parergon, that Ortelius appended to his atlas of modern maps. Largely the work of the master himself, the maps in the Parergon, and this one in particular, are the best engravings that reflect the widespread sixteenth-century interest in classical geography.

Territorial divisions on the map are taken from the story Abraham in Genesis. Ancient tribal names are preserved in the regions of the Philistines, Amelechites, Jebusites, Cenezites, and Gergesites. The cities of Sodom and Gomorrah still thrive along the southern Jordan in the “Valley of the Forest of Salt”, which was to become the Dead Sea. An inset shows the stages of the wanderings of Abraham, from Ur of the Chaldees, the lower Euphrates Valley, to Shechem, Bethel, Damascus, Egypt, and Hebron.

In keeping with the title and biblical theme of the engraving, twenty-two medallions depicting scenes from the life of Abraham leaving Ur, sacrificing on the newly built altars at Shechem and Bethel, receiving the promise of the land, the birth of Isaac, the expulsion of Hagar, the sacrifice of Isaac, and the burials of Sarah and Abraham.

The Wanderings of Abraham is among the most elaborate of Ortelius’ compositions. It demonstrates his combined skills as a cartographer and an artist, and his accomplishment as an historian. Ortelius imaginatively enlivened the earliest period of biblical history for the readers of his Parergon.

Abraham Ortelius was born in Antwerp in 1527.
He was famous cartographer and geographer from the south of the Netherlands.
Ortelius was the founder of the modern Atlas, and can be seen as one of the great Geographers of his time.
Ortelius' family originated from the German city Augsburg.
In1547 Ortelius performed as colorer of maps in the guild of Saint-Lucas in Antwerp.
He shortly lived in England and Liege after 1576 for political reasons.
After this he returned to Antwerp where he lived until he died in 1598