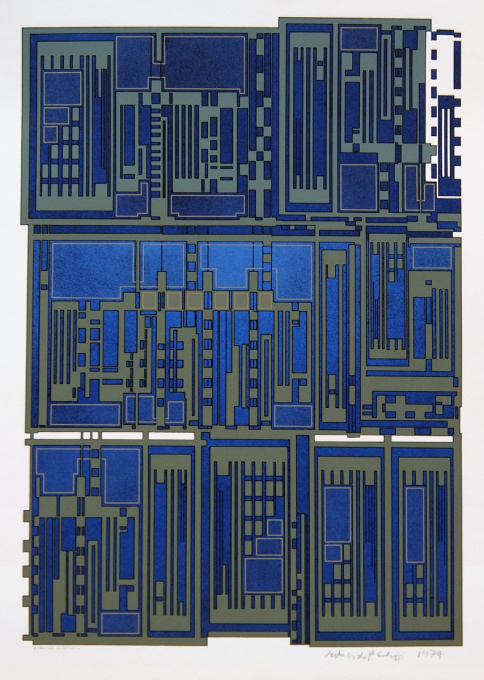 Paolozzi was born 7 March 1924, in Leith in north Edinburgh, Scotland, and was the eldest son of Italian immigrants. In June 1940, when Italy declared war on Britain, Paolozzi was interned (along with most other Italian men in Britain). During his three-month internment at Saughton prison his father, grandfather and uncle, who had also been detained, were among the 446 Italians who drowned when the ship carrying them to Canada, the Arandora Star, was sunk by a German U-boat.

Paolozzi studied at the Edinburgh College of Art in 1943, briefly at Saint Martin's School of Art in 1944, and then at the Slade School of Fine Art at University College London from 1944 to 1947, after which he worked in Paris. While in Paris from 1947–1949, Paolozzi became acquainted with Alberto Giacometti, Jean Arp, Constantin Brâncuși, Georges Braque and Fernand Léger. This period became an important influence for his later work. For example, the influence of Giacometti and many of the original Surrealists he met in Paris can be felt in the group of lost-wax sculptures made by Paolozzi in the mid-1950s. Their surfaces studded with found objects and machine parts, were to gain him big big recognition.
Career

After Paris, he moved back to London eventually establishing his studio in Chelsea. The studio was a workshop filled with hundreds of found objects, models, sculptures, materials, tools, toys and stacks of books.[5] Paolozzi was interested in everything and would use a variety of objects and materials in his work, particularly his collages. In 1955 he moved with his family to the village of Thorpe-le-Soken in Essex. Together with Nigel Henderson (artist) he established Hammer Prints Limited, a design company producing wallpapers, textiles and ceramics that were initially manufactured at Landermere Wharf. Paolozzi came to public attention in the 1950s by producing a range of striking screenprints and ′Art Brut′ sculpture. Paolozzi was a founder of the Independent Group in 1952, which is regarded as the precursor to the mid-1950s British and late 1950s American Pop Art movements. His seminal 1947 collage I was a Rich Man's Plaything is considered the earliest standard bearer representing Pop Art. He always described his work as surrealist art and, while working in a wide range of media though his career, became more closely associated with sculpture. Paolozzi is recognized for producing largely lifelike statuary works, but with rectilinear (often cubic) elements added or removed, or the human form deconstructed in a cubist manner.
Paolozzi sculpture (1982) near Pimlico station of the London Underground system

He taught sculpture and ceramics at several institutions, including University of California, Berkeley (in 1968) and at the Royal College of Art. Paolozzi had a long association with Germany, having worked in Berlin from 1974 as part of the Berlin Artist Programme of the German Academic Exchange Programme. He was a professor at the Fachhochschule in Cologne from 1977 to 1981, and later taught sculpture at the Akademie der Bildenden Künste in Munich. Paolozzi was fond of Munich and many of his works and concept plans were developed in a studio he kept there, including the mosaics of the Tottenham Court Road Station in London.

He took a stab at industrial design in the 1970s with a 500-piece run of the upscale Suomi tableware by Timo Sarpaneva that Paolozzi decorated for the German Rosenthal porcelain maker's Studio Linie.

In the 1960s and 1970s, Paolozzi artistically processed man-machine images from popular science books by German doctor and author Fritz Kahn (1888–1968), such as in his screenprint "Wittgenstein in New York" (1965), the print series "Secrets of Life – The Human Machine and How it Works" (1970), or the cover design for John Barth’s novel "Lost in the Funhouse" (Penguin, 1972). As recently as 2009, the reference to Kahn was discovered by Uta and Thilo von Debschitz during their research of work and life of Fritz Kahn.
Later career

Paolozzi was awarded the CBE in 1968 and in 1979 he was elected to the Royal Academy. During the late 1960s, he started contributing to literary magazine Ambit, which began a lifelong collaboration.

He was promoted to the office of Her Majesty's Sculptor in Ordinary for Scotland in 1986, which he held until his death. Paolozzi was awarded KBE and was knighted by Queen Elizabeth II in 1988.

In 1994, Paolozzi gave the Scottish National Gallery of Modern Art a large body of his works, and much of the content of his studio. In 1999 the National Galleries of Scotland opened the Dean Gallery to display this collection, and the gallery displays a recreation of Paolozzi's studio, with its contents evoking the original London and Munich locations.

In 2001, Paolozzi suffered a near-fatal stroke (causing an incorrect magazine report that he had died). The illness made him a wheelchair user, and he died in a hospital in London in April 2005.

In 2013, Pallant House Gallery in Chichester held a major retrospective 'Eduardo Paolozzi: Collaging Culture' (6 July -13 October 2013) which features over 100 of the artists works, including sculpture, drawings, textile, film, ceramics and paper collage. Pallant House Gallery has an extensive collection of Paolozzi's work gifted and loaned by the architect Colin St John Wilson who commissioned Paolozzi's sculpture 'Newton After Blake' for the British Library.