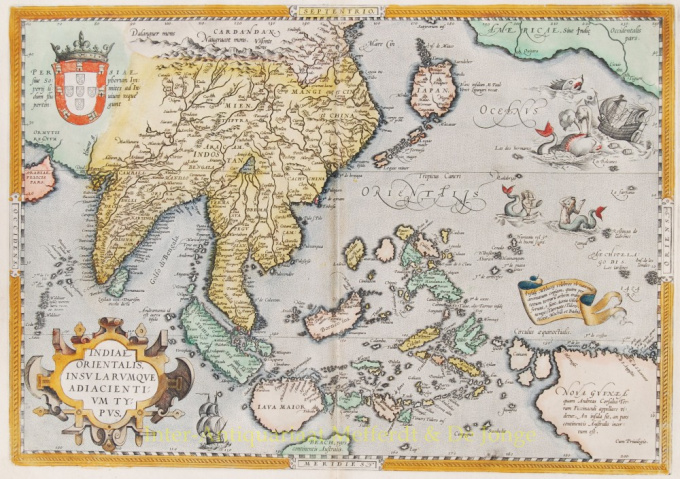 It is also one of the most important to appear in Abraham Ortelius‘ Theatrum Orbis Terrarum. Published in Antwerp, 1587. Ortelius includes early European depictions of both Japan and China and is the first to name Formosa (Taiwan). The Philippines and East Indies or Spice Islands are shown based upon Portuguese and Spanish sources, and before their penetration by the Dutch. Japan is shown in kite form, as a large oval island with chains of smaller islands to the north and south.

The map also shows parts of the American northwest, including the cities of Quiuira, Cicuie and Tigeux. Verso French text.

Abraham Ortelius was born in Antwerp in 1527.
He was famous cartographer and geographer from the south of the Netherlands.
Ortelius was the founder of the modern Atlas, and can be seen as one of the great Geographers of his time.
Ortelius' family originated from the German city Augsburg.
In1547 Ortelius performed as colorer of maps in the guild of Saint-Lucas in Antwerp.
He shortly lived in England and Liege after 1576 for political reasons.
After this he returned to Antwerp where he lived until he died in 1598