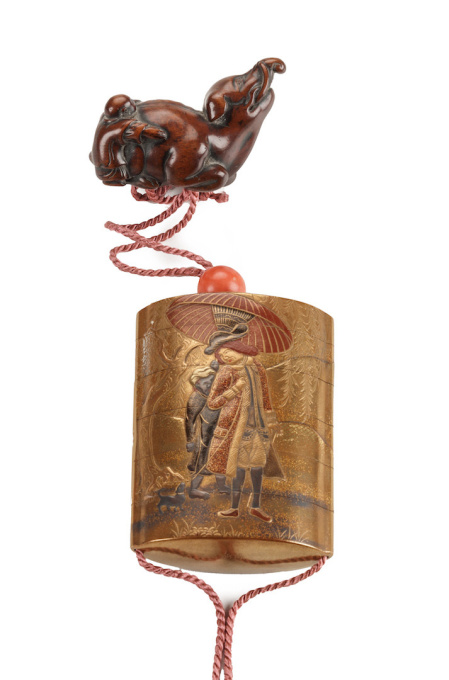 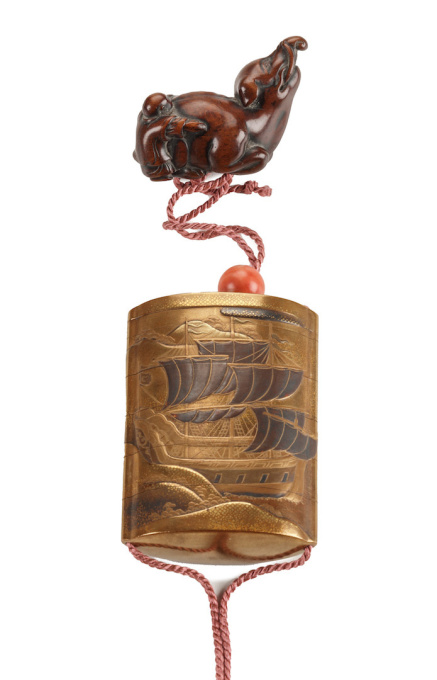 Gold lacquered six-compartment inro, decorated in gold and silver hiramaki-e and takamaki-e and with red lacquer, on one side with a Dutchman, his dog and a Javanese servant holding a sunshade, on the other side a Dutch ship with black sails, the inside of the compartments decorated with nashiji, the netsuke, in the form of an elephant and a boy trying to climb onto it, cedarwood.

Note:
Koryũ family name was Kimura, but this was changed to Koma on his adoption by his brother-in-law Koma KyühakuIII, whose pupil he became. Koma Koryũ was a pivotal figure in the later Koma school, absorbing the skills of his distinguished teacher and passing them on to Kansai I. His pupils also included Omura Gyokuzan and Nomura Kyüho. Koryũ was an inro specialist, but some other artefacts by him are recorded as well.

The decoration of the inro is most likely taken from an early Nagasaki woodblock print of a Dutchman and his servant holding a sunshade, possibly one published by Hariya in the mid 18th century. Since the Dutch, having pockets in their coats and trousers, did not use inro, this inro most likely was not made for export but to satisfy the Japanese fascination for the exotic foreigners. Unlike netsuke of Dutchmen, inro depicting Dutchmen are not common ( for a few examples see A Collection of Nagasaki Colour Prints and Paintings by N.H.N. Mody, plate. 218). The netsuke of the elephant, an animal introduced by the Dutch into Japan, could also be an example of the Japanese fascination with the exotic.