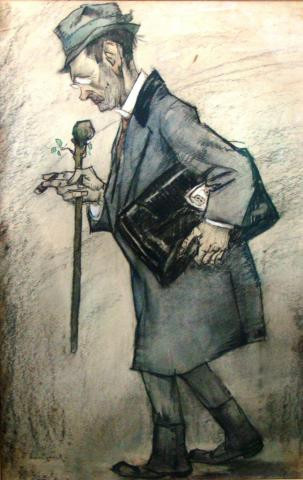 The by Gestel caricatured Jacques Rensburg (Den Haag 1870 - Sobibor 1943) was a well-known poet and translator of Marx, Dante and Boccaccio. Because of his interests, credulousness and/or shabby looks, he was often made fun of by his friends. Leo Gestel was his friend, and depicts him in this drawing as someone absent-minded. A painted portrait of Rensburg by Gestel is in the collection of the Stedelijk Museum, Amsterdam.