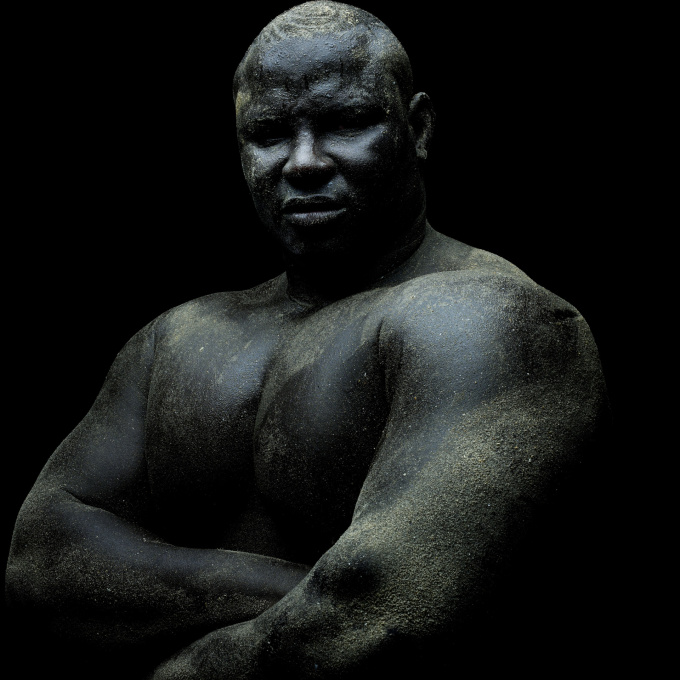 Here everyone aspires to become a living god. Nothing less. In the dark training rooms or on the beaches of the Dakar suburbs, where youngsters train themselves to Senegalese wrestling, everyone awaits feverishly the moment when they will have to wrestle under the burning sun, within the sand arena, in the middle of a stadium that gathers tens of thousands hungry spectators. In order to give them the strength to face their sparring partner, the marabou will coat the wrestlers’ bodies with a potion; he will pour milk on their torsos, their shoulders, their heads, he will start singing the ritual words to cast evil spells away. The amulets they wear will protect them. Then, they will have to strike their opponents. Should one put his weight on his two legs and two arms, lie down on his back or fall out of the circle, then he will be defeated, or even worse, humiliated. Should one come out of the arena as a winner and the overexcited audience will acclaim him king. They might even become champions, wealthy and almost divine some day.

Denis Rouvre has photographed the strong bodies, the tense, perpetually defiant faces of the wrestling apprentices of suburbs of Dakar. They belong to one of the 77 stables of the country and they daily practice this unique sport activity as a subtle mix of traditional wrestling and bare hands boxing. The urbanization movement in the 70’s brought into the cities these traditional fights which were organized among the villages after harvest time. Wrestling became professional and included “boxing”. Punching was added to body contact. Fees that can be counted in millions of CFA Francs come now in addition to the sport and mystical challenge of the fight.

In the hidden training rooms of the streets of Dakar, they come every night with this dream in their minds and ready to take a lot of beating. They, who live on small jobs and tinker with their existence, are burning to strive against their sociological and human conditions. They want to become famous and superhuman. The names of their actual and past idols sound like those of gladiators: Tyson, Bomber, The Slaughterer, The Tiger of Fass, Pikine Hurricane. For this particular round that may change their lives, the wrestlers are ready to fight to death. The look in their eyes tells that they are lions already and that they will leap at the throat of those who will stand on the arena’s sand.

Denis Rouvre is a photographer who is specialised in portraits, living and working in Bagnolet, France. He studied at the École Louis Lumière. His photos have been nationally and internationally published. His latest series depicts survivors from the tsunami that hit Japan in 2011 and was published in a portfolio of The New York Times Magazine. Rouvre’s photo series have been internationally exhibited. He has also published several books, and his numerous prizes include a previous World Press Photo award, and a Sony World Photography Award.