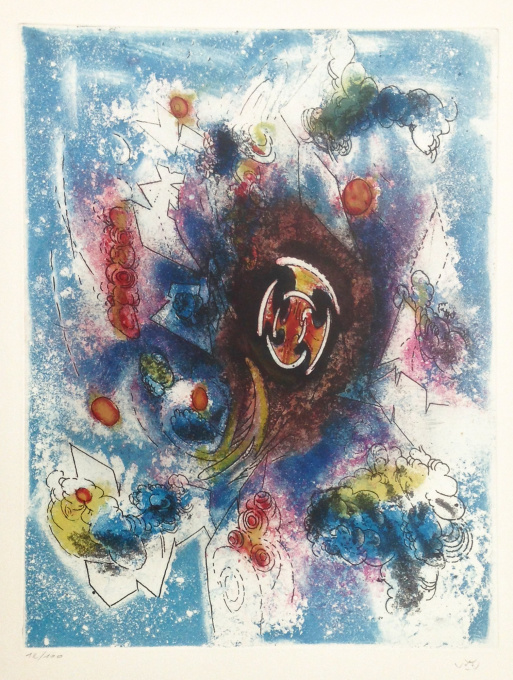 Roberto Matta (1911, Santiago de Chili– 2002, Civitavecchia, Italy), full name Roberto Sebastián Antonio Matta Echaurren, was a Chilean abstract expressionist and surrealist painter. He studied architecture and interior design at the Pontificia Universidad Católica de Chile in Santiago and graduated in 1935. During his travels in Europe and the USA he met artists such as Arshile Gorky, René Magritte, Salvador Dalí, André Breton and Le Corbusier. It was Breton who encouraged Matta and introduced him to the leading members of the Paris Surrealist movement. Matta produced illustrations and articles for Surrealist journals such as Minotaure. He was also introduced to the work of many prominent contemporary European artists, such as Pablo Picasso and Marcel Duchamp. In 1938 Matta stopped drawing and started oil painting for which he is best known. He emigrated to the United States where he lived until 1948. The diffuse light patterns and bold lines on a featureless background in his early paintings give an indication of his direction. During the 1940s and 1950s, the disturbing world was reflected in Matta's work, in which images of electrical machinery and distressed figures appeared. Matta divided his life between Europe and South America during the 1950s and 1960s, successfully combining the political and the semi-abstract in epic surreal canvases. He believed that art and poetry can change lives, and was very involved in the social movements of the 1960s and 1970s. He was a strong supporter of the socialist government of Allende. His 4x24 meter mural The First Goal of the Chilean People was painted over with 16 coats of paint by the military regime of Pinochet in 1973. In 2008 the mural was completely restored and is displayed today in Santiago at the La Granja city hall. Throughout his life, Matta worked with many different types of media, including ceramic, photography, and video production.