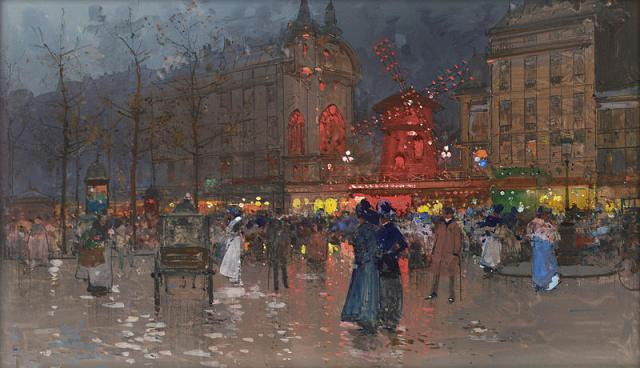 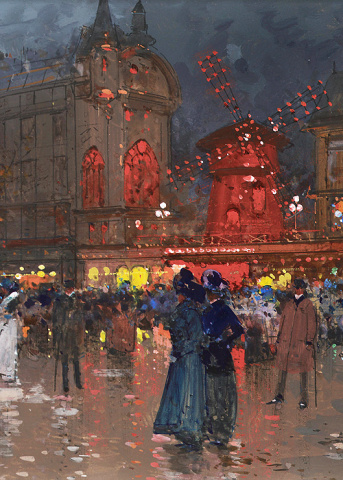 Like the Impressionists, Galien-Laloue painted everyday life with a tenderness of touch. As if in a fleeting glimpse, he caught the ephemeral in the quotidian, showing the new bourgeoisie, strolling along the new arcades, at sidewalks, avenues, in the ever-changing light of autumn or winter, or like above, during one stormy night, in electric light.

Eugène was a French artist of French-Italian parents and was born in Paris on December 11, 1854. He became popular with his street scenes, usually painted in autumn or winter.

His paintings of the early 1900s accurately represent the era in which he lived: a happy, busy Paris, la Belle Époque, with horse-drawn carriages, trolley cars and its first omnibuses. Galien-Laloue's works are valued not only for their contribution to 20th-century art, but for the actual history, which they document.

His work can be seen at the Musée des Beaux-Arts, Louvier; Musée des Beaux-Arts, La Rochelle; Mulhouse, France. A typical Galien-Laloue painting depicts sidewalks and avenues crowded with people or tourists mingling before the capital's monuments. He also painted the landscapes of Normandy and Seine-et-Marne, as well as military scenes he was commissioned to produce in 1914. The Republic of France selected Galien-Laloue to work as a 'war artist,' both during the Franco-Prussian War and World War I, chiefly in watercolor.

Some artists or writers are content to have a pseudonym so as to disguise their work. Eugène Galien Laloue was particularly adept at establishing several identities, since over the course of his career he worked under three pseudonyms: J. Lievin – after a soldier he met during the Franco-Prussian war, E. Galiany – an Italianized version of his own names, and L. Dupuy – after Dupuy Léon who lived in his same area. While these are three confirmed names that he used, there is the possibility that he used other names as well. Even his name “Galien” is questionable, since on occasion he spelled it with one “l” and on his birth certificate it is spelled “Gallien”. Why the artist went to such great lengths to perplex audiences and historians is the question that remains to be answered.  Despite preoccupation with the reclusive nature of this man, he depicted Paris and the surrounding landscape with his cool palette; in doing so he became another recorder of popular Parisian life. He balanced his architectural interest in Paris with several landscape views and was an equally if not more proficient draughtsman.
He had a reclusive personality, which also may explain the reasons behind his numerous pseudonyms. He preferred the solitariness of his studio and thus did not paint his works entirely on-site. Unlike many other artists as well, he did not like to travel and many of his views of other cities or countries were inspired by postcards and photographs, an increasing tendency with many artists as photography became a more established method of use. Noë Willer further elaborates upon the unique personality of this artist (pg. 16):

He was not eccentric but always conservative, practically a royalist.  He was obsessed with his painting.  In his private life he found simplicity alluring: he married three sisters, one after the other (beginning with the youngest and ending with the oldest).  They had all lived next door to him.  He lived a monastic life.  All worldly pursuits, games, alcohol, the pleasure of the flesh were not for him. Riding his bicycle to places in Paris to paint was his only physical exercise.

His personality kept him at a distance from his contemporaries who were working in his same manner. He was more concerned with the sale of his paintings, of which he kept scrupulous notes but still sold each painting for the same price. He was an active participant in the annual Parisian Salons until 1889 where he exhibited two gouaches Bernay (Bernay), and Bords de la Meuse (Banks of the Meuse). After this point he took a five year sabbatical, during which time his daughter was born; he returned to the exhibition in 1904 with Le Boulevard Bonne Nouvelle (The Bonne Nouvelle Boulevard). He also was submitting his works to exhibitions in Angers and Saint Quentin, where his work received the following review (Willer, pg. 33):

Once again we mention Mr. Eugène Galien Laloue for his lovely gouaches, as full as oils, which show most picturesquely the popular quarters of Paris.

As World War I broke out, he was exempt from military service because he had volunteered for the Franco-Prussian war. He was too old to take part in the war. Instead, he took to his canvas and depicted scenes of soldiers in the midst of battle, paying close attention to the setting and other details such as their costumes and the action of their involvement.  His own previous military experience must have inspired his depictions, since in his military scenes his figures are given a more prominent role than in either his Parisian scenes or his landscape paintings.  He identified with these soldiers.

Galien Laloue continued to paint until 1940, when he broke the arm with which he held his brush. Despite his reluctance to integrate himself with others, his paintings offer a record of late nineteenth and early twentieth century Paris, focusing not so much on the relationship between its citizens, but more so on the architectural aspects of the city.  He moved out of Paris many times to depict the landscapes of Normandy and the surroundings of Barbizon, making his home for a short time in Fontainebleau.  While his Parisian scenes were often of the fall and winter, he preferred to document the landscape during the brighter months of spring and summer. He also documented life along the canals and banks of the sea and rivers, showing an interest in maritime exploits.  He had become very popular with both French and especially American artists and continued to paint the same scenes of Paris throughout his career.  He died in his daughter’s house in Chérence, where they had taken refuge at the beginning of the Second World War, on April 18th, 1941.