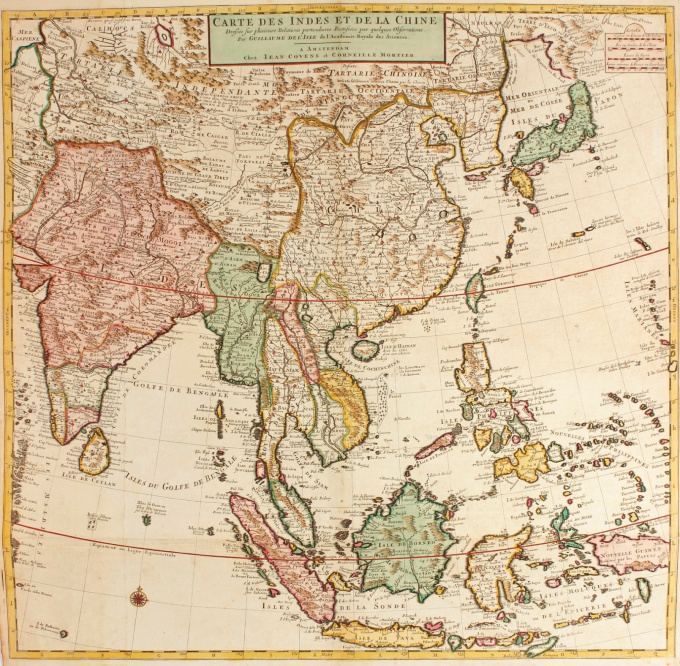 A beautiful map of Southeast Asia in large format. The region had been extensively travelled by the Europeans with their trade routes, especially the islands of the Philippines and the East Indies.

Japan is on the map with the island of Hokkaido ("Terre d 'Yeco ou d'Eso") connected to the Asian mainland and the Japanese Sea is called "Mer Orientale ou Mer de Coree". Korea is admittedly far too wide, but correctly represented as a peninsula. The mythical, but not existing, "Lac de Chiamay", the supposed origin of the rivers Irrawaddy, Dharla, Menam, Brahmaputra and Mekong lies in northern Burma. Furthermore, the map is full of cities, roads, tributes and topography.

Guillaume de l’Isle, also spelled Guillaume Delisle (1675, Paris – 1726, Paris), was a French cartographer. His father Claude de l’Isle studied law, but he also taught history and geography. Guillaume was a very talented son, who would soon assist in the family workshop drawing maps for the historical books of his father.

De l’Isle became a member of the Académie Royale des Sciences, henceforth signing his maps with ‘Géographe de l’Académie.’ In 1718 he received the title of Premier Géographe du Roi. Afterwards his task constituted in teaching geography to the Dauphin, the son of Louis XIV. The accomplishments of Guillaume as cartographer surpassed his father’s. He has drawn maps of European countries and the recently explored continents of Africa and the Americas as well. De l’Isle’s Carte de la Louisiana et du Cours du Mississippi (1718) is a masterpiece of French cartography, and the Carte du Canada ou de la Nouvelle France (1703) is the ﬁrst map to correctly depict the latitude and longitude of Canada.