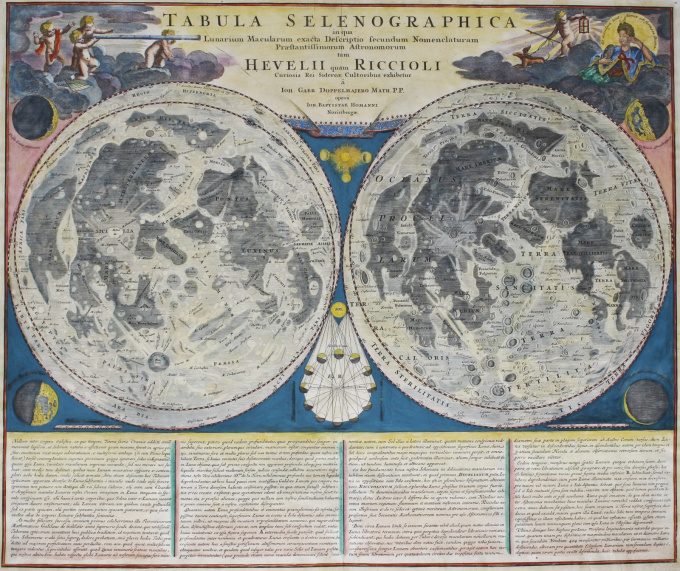 An important map of the moon. "Tabula Selenographica", copper engraving by Johann Baptist Homann after the work of Johann Gabriel Doppelmayr, from the Atlas Coelestis published in Nuremberg 1742 or 1748. Later coloured by hand. Dim. 48.5 x 58 cm.

The left moon chart is considered a fundamental map in selenography - the cartography of the moon. This map first appeared in Johannes Hevelius' Selenographia from 1647, which laid the foundation for many cartographic studies of the moon. Here the moon is depicted as it could never be from the earth, with all visible features on the same scale. Hevelius also states here that the moon surface must be represented as if it is illuminated from a single source, in this case, the morning light.

The map on the right was invented by the Jesuits Giovanni Battista Riccioli and Francesco Grimaldi and appeared for the first time in their Almagestum Novum in 1651. It was an important map because of its entirely new nomenclature, which for a large part remains to this day. is in use. Under their names also the Mare Tranquillitatis, known as the landing spot of the first manned space unit, the Apollo 11.

On the left above the show, we see putti in the back with a telescope, on the right we see Selene the goddess of the moon. Several smaller cards show the moon in her monthly cycle.

Johann Baptist Homann (1664, Oberkammlach – 1724, Nürnberg) was born in Oberkammlach in ‘Landkreis’ Unterallgäu (Bavaria). He was educated at a Jesuit school, but converted to Protestantism.

From 1687 he was a notary in Nürnberg, but he soon decided to become an engraver and cartographer. In the period from 1693-1695 he stayed in Vienna, afterwards he returned to Nürnberg where he founded his own publishing house in 1702. Homann acquired fame as cartographer and was appointed Imperial Geographer by emperor Charles VI in 1715. He also was named a member of the Prussian Academy of Sciences in Berlin.

In 1716 Homann published his celebrated work Grosser Atlas über die ganze Welt (Grand Atlas of all the World). Many maps were drawn along with the engraver Christoph Weigel the Elder.