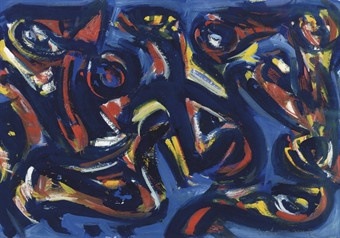 It was during the Second World War that Theo Wolvecamp started to paint. From 1945 - 1947 he attended the Art Academy in Arnhem, The Netherlands, and shortly afterwards he settled in Amsterdam. During this period he was keenly interested in German and Flemish expressionism, and soon developed his own style of spontaneously applied symbols.

Wolvecamp was a co-founder of the Dutch Experimental Group in 1948, and also participated in the CoBrA art movement during that time, departing in 1949 following an exhibition at the Stedelijk Museum. He would become a member again in 1951 and travel internationally with the group, although not much of his work survives from this period. This is because Wolvecamp was often very critical of his work and destroyed many of his own paintings. His style varied over his career as he was constantly influenced by other painters, such as Pablo Picasso, Joan Miró and Kandinsky.

Wolvecamp never felt truly at home in the city and preferred to work in isolation. His signature style, with its characteristically applied forms and colours, build on the symbolic language of abstraction that he developed during the CoBrA period. It was not until 1967 that he chose to go public with his work, at a one-man exhibition in Arnhem. In the years that followed his work has been exhibited in various exhibitions across The Netherlands and other countries.