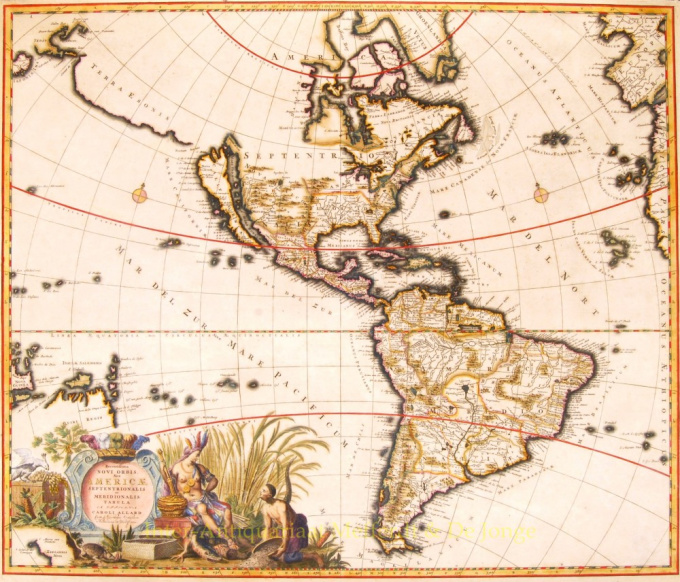 North and South America-heightened with gold 1697

Rare map of North and South America, the first to show important corrections to the mapping of the Great Lakes and the Mississippi River Valley.

The cartouche is especially attractive, with an allegorical figure of America seated within a sugar cane field inhabited by exotic animals and scenes relating to mankind’s eternal search for gold.

Allard’s map includes one of the boldest depictions of the myth of Terra Esonis, a land bridge extending from Japan to the Straits of Anian, here with over a dozen place names and only a small strait on either side. We see a beautiful example of California as an Island, based upon Nicholas Sanson’s second projection. The open ended Great Lakes and primitive early treatment of the Mississippi River are also noteworthy, as is the early Rio Colorado, extending to a lake in Apachas and Navaio regions of the Southwest, and mistakenly referencing Taos and Xila, indicating a confusion with the Rio Grande regarding the Taos reference. The interior of South America includes tribal vignettes in Brazil and a misprojected, overly wide projection of the continent.

The map of America by Allard is derived from that of Frederick de Wit, c. 1675.

Carolus Allard was born in 1648 in Amsterdam.
He was an illustrator, printer and many more professions within the arts.
He was de son of Hugo Allard who was a printer as well. Carolus gave birth to two sons together with his wife Lusija Doresla, who he married on the 14th of July in 1673. Their sons were named Abraham and Hugo II.
Carolus worked in Amsterdam as an artist and art dealer from 1663 until 1708.
His subjects were mainly portraits and military genres.
In 1708 Carolus gave his shop supply to his son Abraham.
Carolus died in 1709 an was buried in february in Amsterdam.