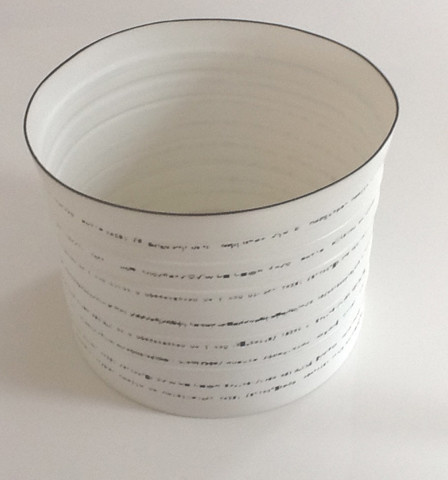 Bodil Manz belongs to the best-known and most influential European ceramists.

She became known through her subtle, poured porcelain objects to which she applied sophisticated decorations. Sometimes she applies decorations both to the inside and the outside, allowing the thin porcelain skin of her objects to make these two decorations flow into each other.
Even though Manz is still applying this concept innovatively, she has been producing entirely different work as well during the last few years. She has kept the cylindrical shapes, but experimented with a much coarser, granular skin and wilder, abstract decorations in various colours.

Method
Manz moulds her work both in plaster and in sand. The shapes moulded in plaster are thin and smooth objects and always have a strict-geometric decoration
The decorations on the sand-moulded objects are more picturesque with more fluid lines and more fanciful colours, sometimes even ornamental elements.
Through these objects as well, she shows that working with porcelain can result in powerful and monumental shapes. Even the smallest object has that monumental appearance

A result which not many ceramists are able to achieve in this difficult material.
Bodil Manz has won virtually all prestigious international prizes and her work has been included in museological collections all over the world.