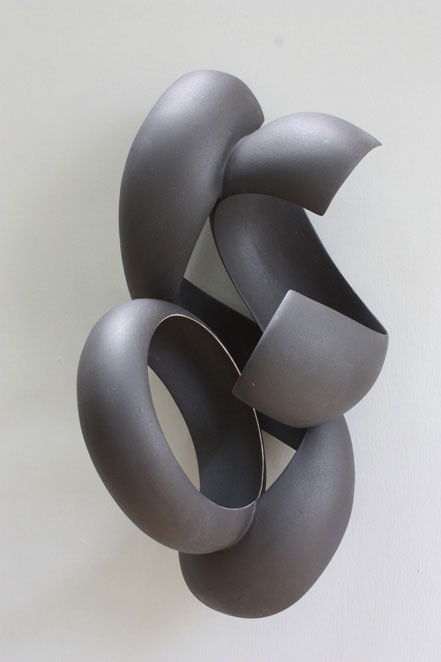 He studied at the Gerrit Rietveld Academy between 1975-1980, Academy, in Amsterdam.
In the latest series Dams makes the elements, that comprise his objects, move more independently, which adds a baroque swing to his work, though the classical ceramic forms can still be distinguished.

Dam's work has shown a clear development, each step following logically from the preceding one. He started his career by throwing simple pot forms, than made the pot rest on it's side, than removed the foot of the pot, and finnaly moved towards a more autonomous use of ceramics. The basic pot form has never disappeared from Dam's work, but the emphasis has shifted towards subtle planes and lines that comprise the object's skin. Thus Dam has moved to the border between ceramics and sculpting.

Wouter Dam is fascinated by the space his ceramic objects occupy. He hardly decores his objects, but exclusively concentrates on the form. He always starts with turning a simple pot form on the wheel. After this pot has dried, Dam cuts it into parts. He then reassembles these parts to create a new object.

Dam is very stict in his use of color. The majority of his objects are uni color, although on a few occasions he adds a subtle accent in another color. This accent always serves to enhance the lines already present in the object Coloring is done by rubbing engobes, layer by layer till the color he wishes has been achived.