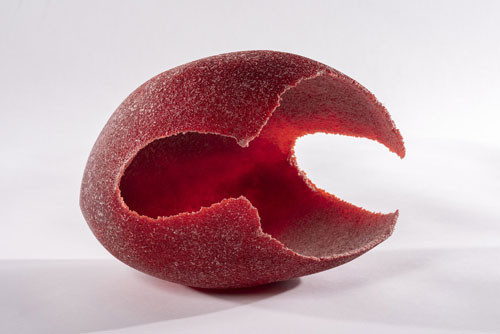 Carine Neutjens uses the pāte de verre technique.
As part of this, small glass granules are mixed with a binding agent, forming a paste. This paste is applied to a mould layer by layer until the desired effect has been obtained. The remaining open space in the mould is filled with sand, following which the entire object is fired.
The duration of firing, as well as the height of the temperature determine the final appearance of the surface. Carine Neutjens prefers a granular surface. After firing, the sand is removed and the shape is taken out of the mould.

The work by Carine Neutjens is evolving from the rather taut curves she initially made to more baroque forms. The brittle edges of the curves lend them a very fragile appearance and do not lead one to suspect that the bowl itself is solid, often with a thick surface.
The objects have been inspired by organic elements such as corals, lava flows, shells, rocks and fossils.
Even though the shape remains essential, structure and colour are gaining significance.
Pāte de verre is a demanding technique challenging the artist to find a balance between the brittle and fragile surface and an archtitectural and robust design. Each glass object is an experiment, breaking new grounds, balancing between art and kitsch, between copying and creating, in order to come to an interpretation of what nature evokes.

As she doesn't work with glass aby more she,for the Galleries 25th jubilee, she send in this beautifull red object. The last one that will be on the market