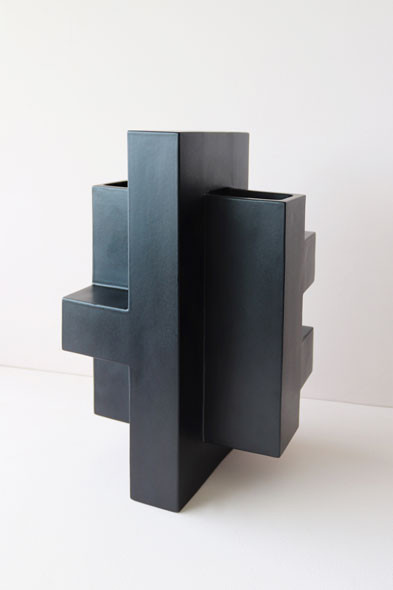 The work of Esther Stasse consists of cast elements.
Sometimes such elements are used singly.
In most case objects result from the stacking or combining of several shapes.
This stacking occasionally goes so far that her objects seem to defy the laws
of gravity.
She has a perfect command of the technical part: she can use her moulds several
times, and she can combine her castings in objects as simple or as complex as
she likes. Sometimes her objects lean over so strongly that they look unstable.
Nonetheless she pays much attention to the foot of an object. For this exhibition
she has made a distinct point of strengthening and stabilizing the feet of her
objects. Although her technique and her geometrical austerity are influenced by
Van der Vaart, she has gone her own way. At the moment she experiments with
leaving out forms instead of incorporating more and more, and she has turned half
tubes inside out, as a 'recalcitrant reaction' to opinions on her earlier work,
as she puts it herself.
All in all she has created a fascinating series of objects that strengthens her
personal style and clearly shows that modern ceramics can be functional and
autonomous at the same time.