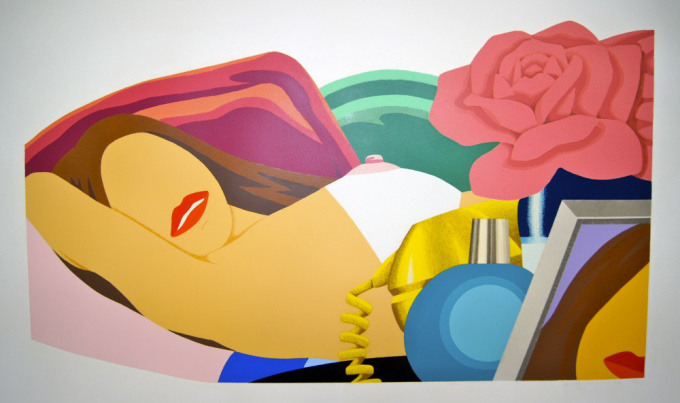 Tom Wesselmann, an American Pop artist born on February 23, 1931 in Cincinnati, Ohio, was a printmaker, sculptor and collagist and a leading figure for Pop Art, often focusing on female nudes and magnified objects. He holds a psychology degree from the University of Cincinnati and a diploma in fine art from the Cooper Union in New York. Shortly after he served in the Korean War during the early 1950s. While staged in Korea he began drawing cartoons.

Wesselmann moved to New York where he started his Great American Nude-series in 1961, drawing from American media culture and imagery. His works were drenched in bold colours. Despite the fact that Wesselmann objected to the label of “Pop” in artist he was one of its leaders, together with Andy Warhol and Roy Lichtenstein, experimenting with materials and imagery, including collage and sculpture. He held showings at the Tanager and Green galleries in the early 1960s.

He created art that incorporated and blended commonplace real-world items with historical subjects, often focused on reclining female nude. Wesselmann concluded his “Nude” series in the 1970s and turned to still life paintings. His objects changed as well. No more female nude but out of proportion everyday objects like toothbrushes and keys. During this period he also made his “Smokers” and “Bedroom Painting” art

Tom Wesselmann founded the Judson Gallery together with Dine and Marcus Ratliff and continued to live and work in New York until his death on December 17, 2004. Wesselmann was 73years old. His work is part of many internationally acclaimed public and private collections.

After his death many museums showed a renewed interest in his work and the Museo d’Arte Contemporanea Roma (MACRO) exhibited a retrospective in 2005 followed by L&M Arts in New York a year later. In 2007 Maxwell Davidson and Yvon Lambert, two galleries jointly held a retrospective for the “Drop-Out” series in New York.