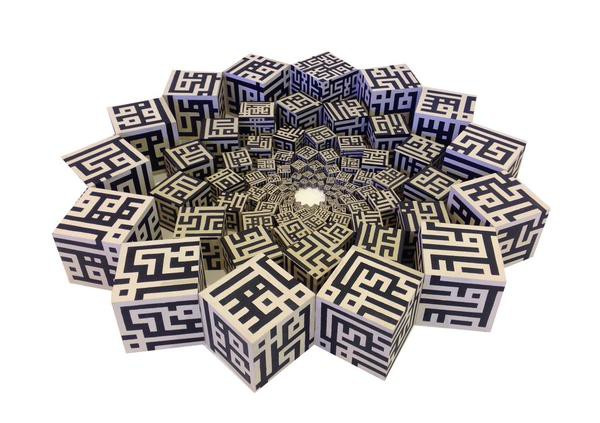 Shahida Ahmed was born in Lancashire, United Kingdom. She currently resides in the UK and Middle East. She Studied Visual Arts at “Bretton Hall, “Leeds University with ceramist Jim Robison and Art historian David Hill who is known for his book on Turner on the Thames . Shahida’s art is most noted for her remarkable, sometimes unconventional use of clay as a medium, but also for her running theme of exploring Islam through art.

In 1996 Shahida was in receipt of a scholarship for the “Royal College Arts,” London in 1997 and was also awarded a licentiateship from the Society of Designer Craftsmen. In 2012 she received double Master’s in Community Leadership and Visual Arts from the “University of Leeds,” and “University of Central Lancashire,” in 2012.
Shahida grew up with the love for culture and heritage. Her inspiration came from Rumi’s poetry and Islamic architecture and calligraphy pattern. Art school enabled her to explore, underpin ideas and utilize them in her work, to share with an audience in the West, the beauty of Islamic art and its elements. She is also known for her installations in public spaces and her contributions to the arts via media such as radio and television.

She was given recognition for being the first Muslim female ceramic artist born in the UK. When the Gulf war started, Shahida felt that Art was a universal tool and a dialogue in which we saw the beauty and peace through Art and not through media’s negativity. She believes in seeing the differences and embracing the similarities and using art as a universal platform for all.

Shahida’s work is always a showcase of inexpressible beauty, but not necessarily so provocative, though always original and inventive. An exhibition for His Royal Highness Prince Charles in 2010 saw her create a series of clay cubes in varying sizes. Each cube was decorated with Arabic calligraphy in the style of ‘kufic’ script, ‘which is quite blocky and reminded me of bar codes’ describes Shahida ‘but I wanted to work with a genre of Islamic art to show religion as a façade and that the focus should be on what is in your heart. On the outside of the cube was Islam represented in Arabic script, but no one can ever see beneath that, at what is inside the cube. Shahida’s work also compromises of paintings. The Dervish series of paintings are of abstracted Sufi figures, whirling in white robes against a stylised, decorated orange and earth toned background. Arms outstretched, heads back, the figures draw the eye upward through the painting and towards heaven. Follow up pieces would be done in black and white with a focus on the movement of the figures. This was also her first time using figures, in her work. The painting collections use perspective in a new manner there is akin to the paradoxes which characterize the essence of Sufism; colour and energy move harmoniously with stillness and simplicity.

In 2016 Shahida changed her Art signature to “She,”….. “just a woman, no faith, colour or culture,” she says. Her art is created to share and be freely interpreted by the viewer whom she wants to engage in each piece. She likes to use simplistic shapes like triangles which represent the fire water and earth and cubes which capture an unknown void.