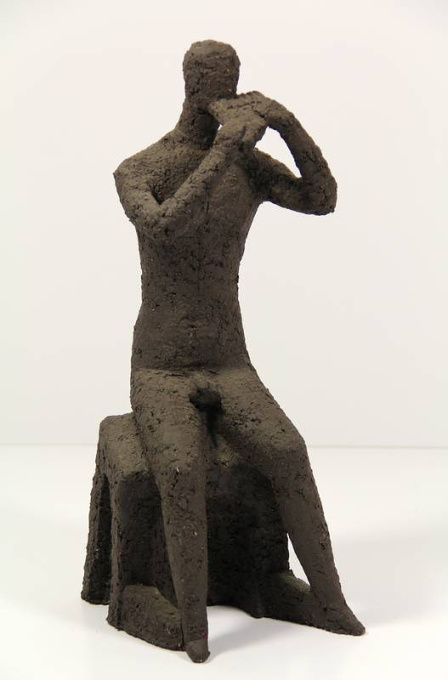 Terracotta
Height: 36 cm
Provenance: Galerie de Krijtkring, Hoorn. NB Stauthamer studied at the Rijksacademie van Beeldende Kunsten (State Academy of Fine Arts) in Amsterdam. He was a sculptor but also a painter and medallist. Stauthamer created medals for the city of Leeuwarden and the Winkler Prins Encyclopedie (Winkler Prins Encyclopedia) in 1970, in honour of its centenery. His sculptures can be found throughout the Netherlands. He also taught at the Academie van Beeldende Kunsten (State Academy of Fine Arts) in Arnhem. He lived, together with his wife (the visual artist Josje Smit), in the monumental building De Gecroonde Raep, situated at the Oudezijds Voorburgwal in Amsterdam. There, they had set up a studio in the attic which was originally used for tabacco. Stauthamer's artworks can be found among others in the Hague (Ministerie van Landbouw, Natuur en Voedselkwaliteit) and Amsterdam (Jan van Galenhal).

Constantinus (Cephas) Stauthamer was a Dutch sculptor, painter and medallist. Born in 1899 in The Hague, he went to the Rijksakademie van Beeldende Kunsten (National Academy of Visual Arts) in Amsterdam from 1929 to 1934. His sculptures are to be found in public space throughout the Netherlands and he has also made a commemorative medal. He was an academic lecturer at the Academie voor Beeldende Kunsten Arnhem. He was a member of several artist associations; the Nederlandse Kring van Beeldhouwers NKVB (Dutch society of sulptors), Federatie van Verenigingen van Beroeps Beeldende Kunstenaars Amsterdam, and the Kunstenaarsvereniging de Onafhankelijken. He has traveled through Europe and died in Amsterdam in 1983.