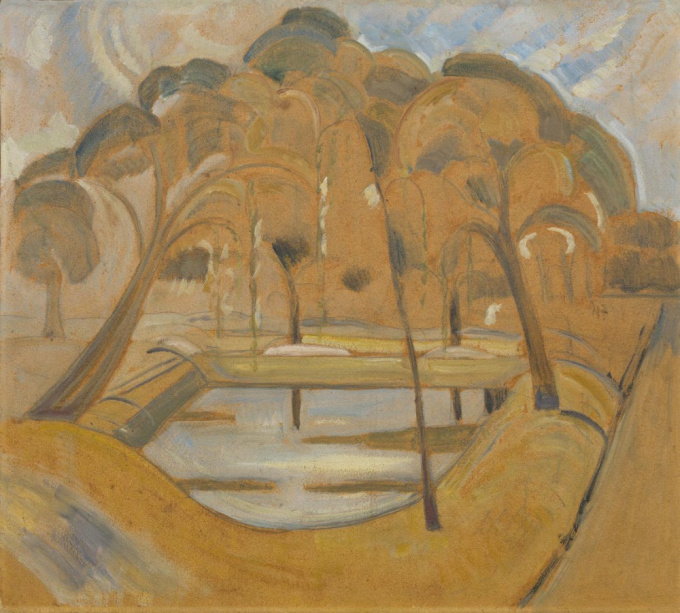 Jacoba van Heemskerck’s work reveals a great affinity with German Expressionism and Kandinsky’s abstract art, particularly when in Berlin, after 1913, when she regularly mixed in the avant-garde circles around Herwarth Walden and his gallery ‘Der Sturm’.There, along with Kandinsky, Marc and Klee, she was seen as one of the great modern artists. Under their influence, she evolved an idiosyncratic form of Expressionism, in which her anthroposophist philosophy played a role. Her paintings and woodcuts clearly reflect an inner spiritual experience. Thus a tree was not painted as she sa wit but as her spirit experienced it. She emphasised this break with reality by giving her works numbers instead of a title.

Her father, Jacob Eduard van Heemskerck van Beest, was an officer in the Royal Netherlands Navy who also painted seascapes and landscapes. Her first art lessons came from him. She later took private lessons from two local artists before attending classes at the Royal Academy of Art from 1897 to 1901, where she studied with Ferdinand Hart Nibbrig.

Her first contact with Modern art came in Paris, where she took lessons from Eugène Carrière. She remained in France until 1904, then went to live with her sister, Lucie, and was introduced to the art collector, Marie Tak van Poortvliet, who became her lifelong friend and later built a studio for her in the garden of her home. After 1906, she spent her Summers in Domburg, where she came into contact with avant-garde painters such as Jan Toorop and Piet Mondriaan, who offered her advice. Around 1911, she was briefly interested in Cubism.

Shortly after, she became involved in Anthroposophy, possibly through the influence of her former teacher, Nibbrig, who was a Theosophist. She then became an avid follower of Der Sturm, an avant-garde art magazine founded by Herwarth Walden, and turned increasingly to Abstraction. In 1913, she attented the "Erster Deutscher Herbstsalon" in Berlin, where she met Walden and started what would be a lifelong correspondence. Thanks to his efforts, her work was popular in Germany, while it remained somewhat ignored in her home country.

After 1916, she developed an interest in stained glass windows, designing them for the naval barracks and the Municipal Health Department building in Amsterdam, as well as private residences.From 1922, she lived in Domburg with her old friend and patron, Tak van Poortvliet.

She died suddenly, from an attack of angina.Both Tak van Poortvliet and Walden mounted exhibitions of her work, in Amsterdam and Berlin respectively. In 2005, a major retrospective was held at the Gemeentemuseum Den Haag.