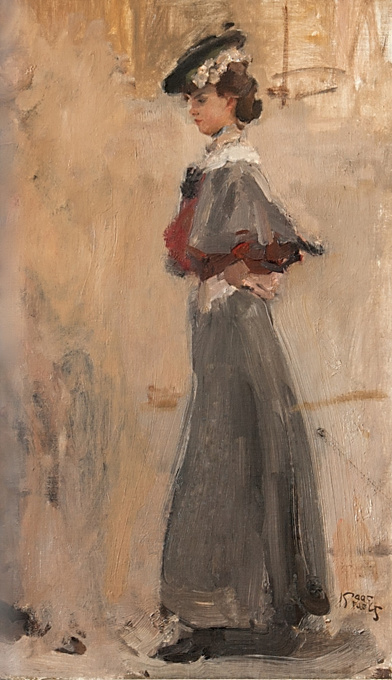 A raft painted portrait of a young woman, full length in her gray long skirt, red blouse, gray little cape and hat with flower border. A white glove side, it makes it complete.

The Place Vendome is the center of the fashion world in Paris. On the Rue de la Paix are several fashion houses, including Paquin. With letters of recommendation from Maison Hirsch Amsterdam receives Isaac Israels here also have the opportunity to work in the sewing and fitting rooms. Although he is viewed somewhat strange at first; he is a spy Hirsch? No. therefore. He wants but paint only.

The women working in the sewing factories listed in Paris midi ettes. After work, they walk home, in their best clothes. Midi Rockettes wear while working a long skirt and a white or blue blouse.