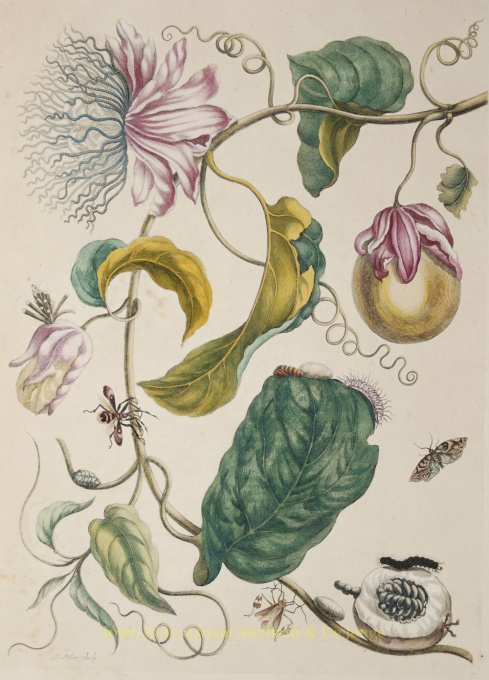 Passion fruit [Sur.: Markoesa]. The fruit of this creeper belongs to the family of the passion flora. The pistil of the passionflower symbolizes the Passion of Christ. The Suriname version can be yellow or orange. It is said that Markoesa has a calming effect. If you eat Markoesa before bedtime, you will have sweet dreams.

Maria Sibylla Merian was born in Germany, in Frankfurt am Main on the second of April in 1647.
She was a German-born naturalist and scientific illustrator, a descendant of the Frankfurt branch of the Swiss Merian family, founders of one of Europe's largest publishing houses in the 17th century.
Merian received her artistic training from her stepfather, Jacob Marrel, a student of the still life painter Georg Flegel. She remained in Frankfurt until 1670, relocating subsequently to Nuremberg, the small village of Wieuwerd in the Dutch Republic (1685), where she stayed in a Labadist community till 1691, and Amsterdam.
Merian published her first book of natural illustrations, titled Neues Blumenbuch, in 1675 at age 28.
After her visit to South America Merian proceeded to publish her major work, Metamorphosis insectorum Surinamensium, in 1705, for which she became famous. Because of her careful observations and documentation of the metamorphosis of the butterfly, she is considered by David Attenborough to be among the most significant contributors to the field of entomology. She was a leading entomologist of her time and she discovered many new facts about insect life through her studies.

In 1715, Merian suffered a stroke and was partially paralysed. She continued her work, but her illness probably affected her ability to work. A later registry lists her as a pauper.
Maria Sibylla Merian died in Amsterdam on 13 January 1717 and was buried four days later. Her daughter Dorothea published Erucarum Ortus Alimentum et Paradoxa Metamorphosis, a collection of her mother's work, posthumously.