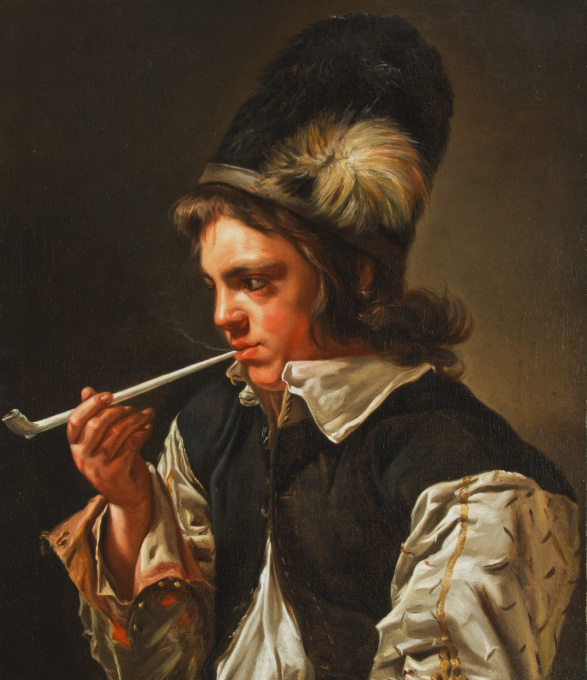 Portrait of a Young Man with a Pipe 1656


Woutiers’s oeuvre consists out of at least 26 paintings and one drawing and there is documentary evidence in relation to five other paintings. Within this oeuvre it is apparent that she favored the representation of half-length images of youths or young men. Her astonishing talent is recognizable in this ravishing painted genre portrait. Her brushwork varies from very subtile touches to broad, vigorous strokes.
The painting under discussion is not a real portrait, although it is painted from life. The background is dark brown and the model is closely cropped to enhance its immediacy. It had become part of the Flemish tradition to depict single genre figures after the return to Antwerp of Adriaen Brouwer (1605/06-1638) in the early thirties . Many artists painted low life characters as such or created images of visitors of an inn posing with jugs and pipes whether to personify taste or smell in a series of the Senses or to characterize the sin of gluttony in a series of the Seven Sins. Looking at the young man with his pipe, one wonders if also this canvas once formed a part of a cycle of the Five Senses. This supposition is at first sight corroborated by the fact that respectively in 1883 and in 1898 a cycle of five canvases (of the same dimensions, 68 x 58 cm), representing the Five Senses, fully signed and dated ‘Michaelina Wautier, 1650’, has been auctioned in Valenciennes. In 1883 the paintings were described as coming from the collection of ‘M. de Malherbe’. In 1898 they were left by ‘feu Mr. Jean-Baptiste Foucart’. Since then the paintings disappeared although they received a short laudable mentioning in 1899 in the Zeitschrift für Bildende Kunst (volume 10): Die fünf Sinne von Michaelina Wautier, 1650. bez., sehr gut in Zeichnung und Ausdruck, etwas unangenehm braun in der Farbe, aber amüsante Bilder. Thanks to the preserved auction catalogues (Library of the Royal Museum of Fine Arts, Brussels) it becomes clear that the painting of the youth with a pipe did not partake of the same cycle because not one of the youngsters has been described as holding a pipe. The boy referring to the sense of Smell was portrayed while holding a stinking egg and the youth, said to be an allegory of Taste, was just eating a slice of bread . The fact that the painting discussed here has approximately the same dimensions as the five canvases of the Senses is neither an argument because Michaelina Woutiers used more regularly bearers of a comparable format .

Because of the delicacy of the representation and the balanced proportions it could also be argued that Woutiers had the intention to paint the image of this youth as a composition on its own. In the ‘Portrait of a young man’ in the Royal Museum of Antwerp (canvas, 69 x 58 cm, signed and dated in the upper right part ‘Michaelina Wautier 1655’) a comparable composition has been used by her for a half-length image. Both sitters do not face the spectator and are concentrating on something that happens outside the frame of the painting. They are both lost deep in thought and for that reason raise a feeling of melancholy. While the youngster on the Antwerp canvas is clothed in a sober cloak, the artist has given much more attention to the outfit of the young man on our painting. His cap consists out of wool or fur and is adorned with a decorative feather. The form of his headdress appears to be rather unconvential in the context of mid seventeenth-century fashion. The cylindrical form reminds more of late 16th-century Bohemian hats mostly worn by rich civilians and soldiers. This ahistorical element may confirm the allegorical meaning of the painting and proves that Woutiers was very much in touch with her time. Many famous contemporary masters such as Rembrandt and Peter Paul Rubens loved to integrate exotic costumes into their historical and allegorical scenes. While his hat may refer to past times, his doublet with set-in wide silk sleeves with ribbons and guilded buttons look extremely fashionable. In the opening of the ‘manchettes’ some touches of red underdressing are visible as is the case beneath the slashes of the sleeves. Her passion for the rendering of beautiful young boys may imply that she was influenced by prototypes of Caravaggio. Similar is also her sensual application of diffuse yellow light. Although the figure remains partly in the shadow thanks to some highlights on the forehead, the cheeks and the fingers, she succeeds to enhance the liveliness of the young model. The face of the youngster has been executed with a free brush while the contours of the eyes and the eyelashes seems to be worked up with some black lines. Woutiers always stands out because of her ability in the rendering of textiles. The suppleness of the broad collar, the chemise and the sleeves is astonishing. As suggested above, the painting may just represent a beautiful youngster but at the same time there are enough arguments to suggest that the figure may also possess an allegorical meaning. Because of the attribute of the pipe in fragile white clay, the plume of smoke leaving his mouth and the brightening of the tobacco, the scene contains undoubtedly a reference to vanity and transience. As the smoke will disappear and the light in the long stemmed clay pipe will turn out, so will his youth and his fancy outfit pass away. In this context it is relevant to refer to a small painting of a Young boy with a pipe (canvas, 42 x 33 cm)that appeared at auction in 2006. According to the website the painting was fully signed ‘Charles Wautier’ and was dated ‘166[?]’. On the basis of a bad reproduction the attribution may have been correct. All the ingredients of Michaelina’s version are also to be detected in this canvas. However, the boy looks much younger and is looking up to the right. A plume of smoke escapes from his mouth and he too is wearing a cylindrical hat resembling the one we can see on the painting by Michaelina Woutiers .

The painting bears a signature that is easy to decipher with the help of other signatures on paintings by Woutiers. More than half of her paintings are fully signed. Because of the date of this painting (16(5)6) it seems evident to compare with the signature on two other paintings apparently dating from the same decade. On a canvas with the representation of St. John (Italian Private Collection, canvas, 69 x 60,5 cm) the name of ‘Michaelina Wautier’ is easily readable. The same signature in italics appears on the majestic painting of the Annunciation (Louveciennes, Musée Promenade de Marly-le-Roy, canvas, 200 x 134 cm), close to the date ‘1659’. From a stylistic point of view the painting of the Young man with a Pipe has indeed to be situated c. 1655.

Although Michaelina Woutiers mastered almost any genre, her genre scenes and portraits display a freshness and accuracy of observation that reminds us of the most outstanding Baroque painters such as Johannes Vermeer and Michaël Sweerts. Her unrestrained ambition to capture human emotions, to render flattering textures and investigate the literary tradition makes out of her a baroque phenomenon that is even more astonishing than Artemisia Gentileschi.

Michaelina Woutiers was born in 1617.
She was a painter from the Southern Netherlands.
She was active from 1643 in Brussels and sold 4 works to Archduke Leopold Wilhelm for his picture gallery that were attributed to her in the catalog of his collection drawn up in 1659.
The subjects of her paintings differed from portraits, still lives, christian/religious representations, mythology, and flower still lives.
She died in 1689.