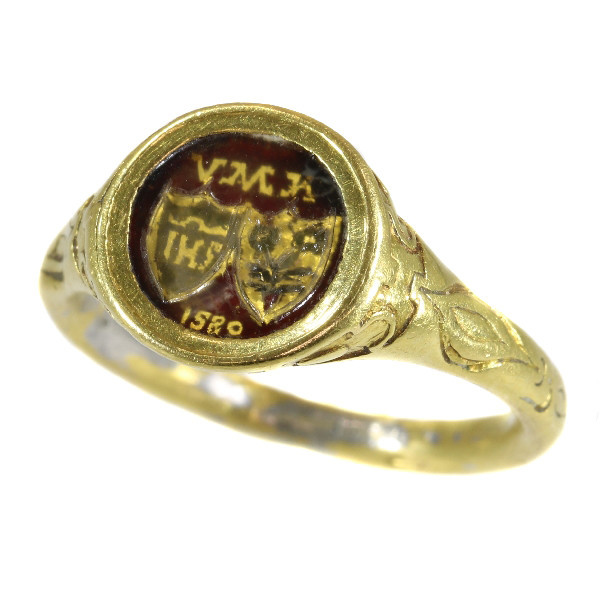 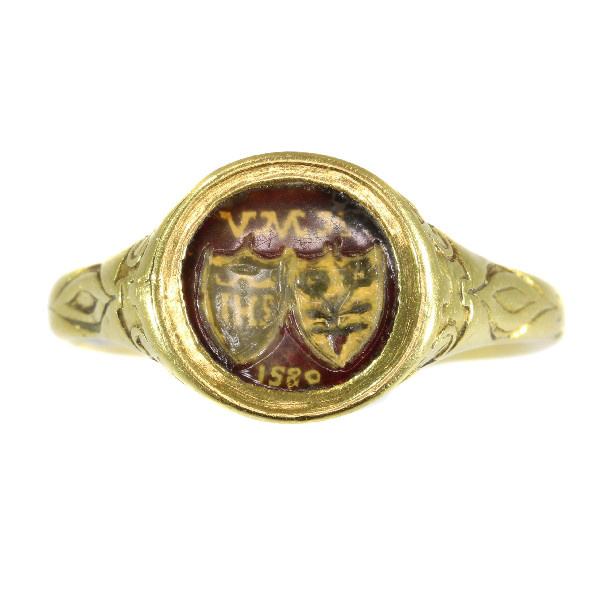 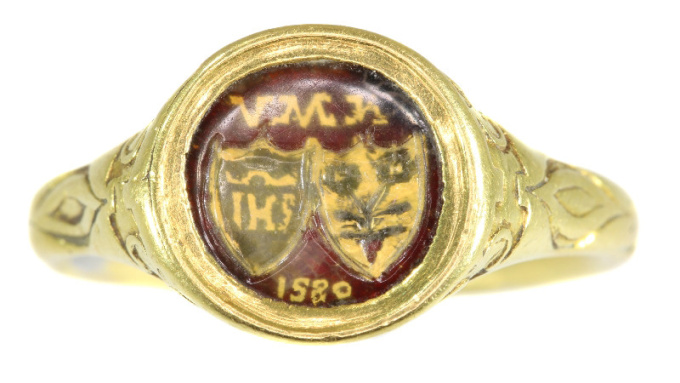 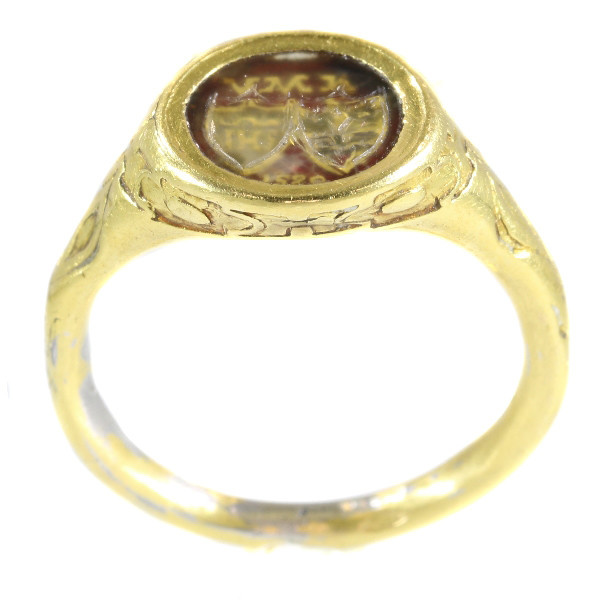 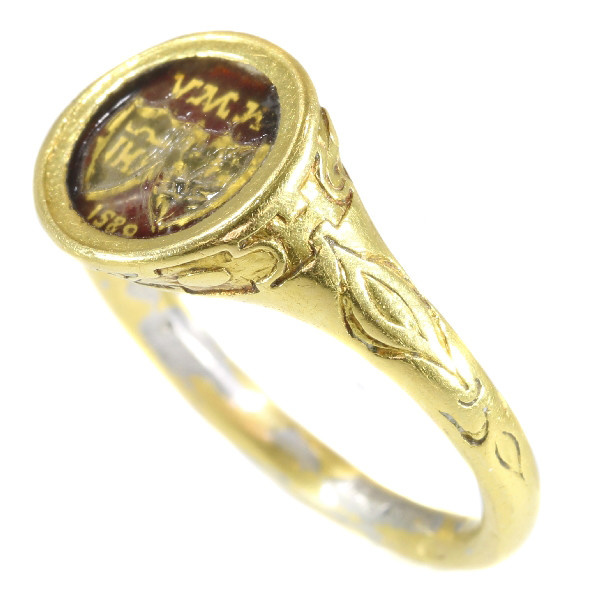 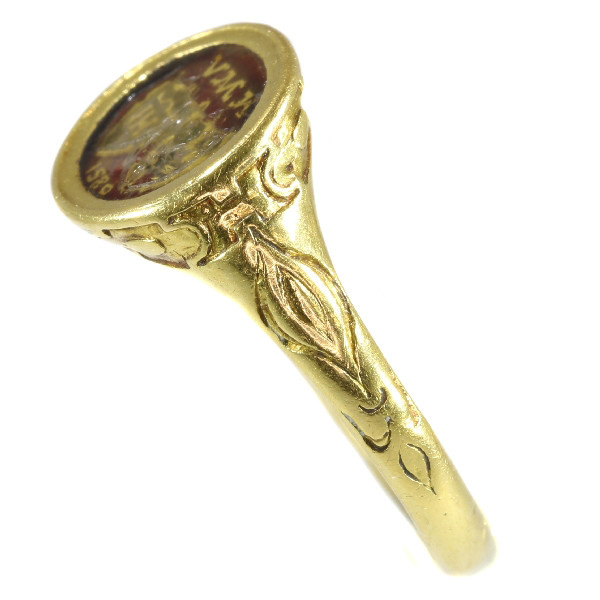 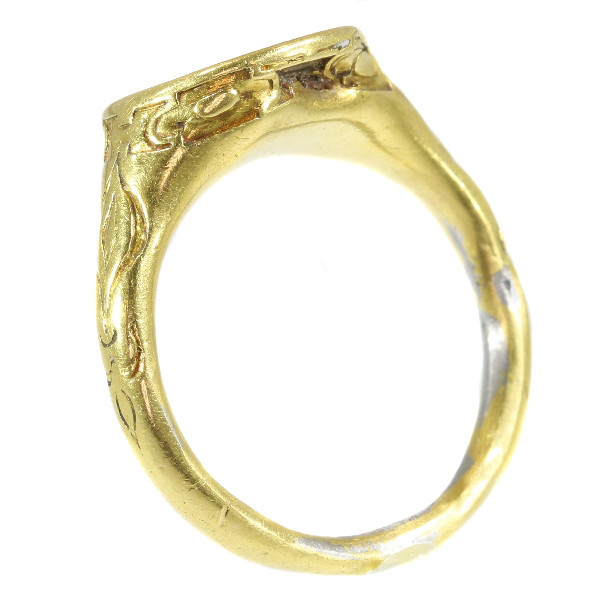 There's a depth to this 18K yellow gold Renaissance ring as it must have gone to astonishing lengths to make it from the year 1580 to our present time.
The identity of the initial owner is fused into four engravings embedded in red enamel in the top of the ring and safely sealed off presumably by a small slice of rock crystal. One coat of arms with the Christogram "IHS" and one with a monogram of aflowering stem both topped by the letters VMK must symbolise a brotherhood of great beliefs. We dare say even of great importance, as the ring is made out of 18K gold which elevates it to a higher level of noblesse.

Once, this ring may have been crafted as part of a person's history, but each person it touches here and now actually becomes part of the ring's own chronicle. What an extraordinary experience to be part of something before and beyond yourself.

Rings with a similar amount of allure and heritage are comprehensively described in the book "Rings - Jewelry of Power, Love and Loyalty" by Diana Scarisbrick, published by Thames & Hudson (ISBN 978-0-500-29112-2)

Condition: acceptable condition especially considering its age. (traces of wear aside head of ring and remains of old repairs at the inside of the shank)
-  (more info on our condition scale)

Style: Renaissance - The Renaissance (Italian: Rinascimento, from ri- "again" and nascere "be born") was a cultural movement that spanned roughly the 14th to the 17th century, beginning in Florence in the Late Middle Ages and later spreading to the rest ofEurope. The term is also used more loosely to refer to the historic era, but since the changes of the Renaissance were not uniform across Europe, this is a general use of the term. As a cultural movement, it encompassed a resurgence of learning based onclassical sources, the development of linear perspective in painting, and gradual but widespread educational reform. Traditionally, this intellectual transformation has resulted in the Renaissance being viewed as a bridge between the Middle Ages and theModern era. Although the Renaissance saw revolutions in many intellectual pursuits, as well as social and political upheaval, it is perhaps best known for its artistic developments and the contributions of such polymaths as Leonardo da Vinci andMichelangelo, who inspired the term "Renaissance man".
-  See also: Renaissanceor more info on styles

Theme: Renaissance brotherhood ring in gold centered of a probably rock crystal on paillon and engraved with two coats of arms

Extra information (2): IHS - IHS also called a Christogram, is a monogram symbolizing Jesus Christ. From Greek it is an abbreviation of the name Jesus. In Eastern Orthodox Church the Christogram is composed with letters X and P and I and X arranged into the cross. They arethe first letters of one from two words in Greek language: Christ and Jesus Christ. In the Western culture there exist the compositions: "IHS" and also "IHC" being the first letters (iota-eta-sigma) of the name Jesus in Greek alphabet. The abbreviationin form "IHS" appeared in first time on the coins of Justinian II on the turn of the 7th and 8th centuries. The order of Jesuits, in other words the Society of Jesus (Societas Iesu), adopted IHS as its fixed emblem - the symbol in 17th century. Thereappeared also Latin interpretations of the abbreviation IHS, among others: Iesus Humilis Societas - Humble Society of Jesus, Iesus Hominum Salvator - Jesus, Savior of men, but and also In hoc signo (vinces) - In this sign (you will win). These developedinscriptions were most likely formed because in the Middle Ages people mistakenly read the letter E as H. (from: Wikipedia)

Resizing: Resizing is possible but because of the age of the ring we prefer to leave it untouched. We could make an additional inner ring so the ring itself is not harmed, for this work we have to charge. We cannot guarantee to make it on every size; so pleaseask in advance. Return policy on this ring is not valid anymore once this work has been done.
-  (more info on ring sizes)