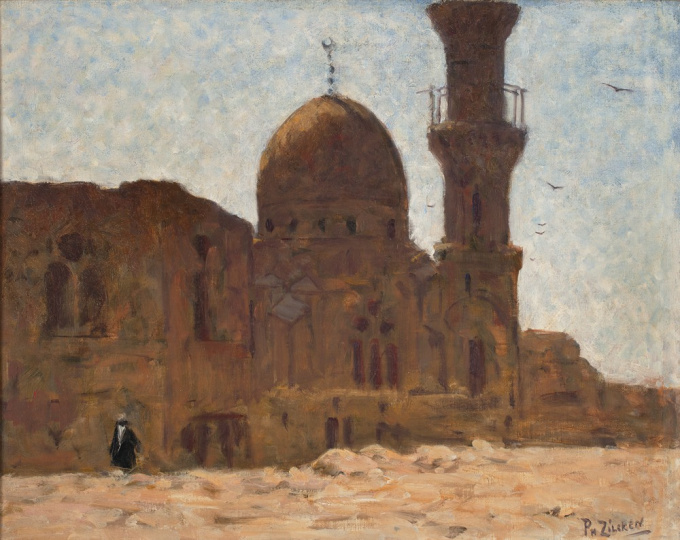 The painter, printmaker and author Philippe Louis Zilcken was a man of the world. He travelled all over Europe and the north of Africa and had famous friends everywhere. When the poet Verlaine visited Holland he stayed with Zilcken. He is one of the few dutchmen mentioned in the diaries of the brothers the Goncourt. As a painter he was especially known for his oriental works, like this painting. "La Mosque d'Akzonkor" is the French name for the Blue Mosque. This Mosque at Cairo is one of the many blue Mosques in the world.
Oil on paint, signed lower right.

Charles Louis Philippe Zilcken was a Dutch artist and writer. He was born in The Hague in 1857, the place where he first registered for drawing lessons during his studies at the Gymnasium Haganum as well. He went down in history due to his position as a co-founder of the Dutch Etching Society and as an editor for Elsevier's monthly Illustrated Journal, the predecessor of the Elsevier Journal, from 1896 to 1905.

In 1928 he personally wrote his memoires under the title translated as 'Memories of a Dutch Painter of the Nineteenth Century'; primarily a remembrance of his travels to and interest in North-African countries such as Egypt. His focus on the Oriental can be traced in his oil paintings, pastels and etchings when examining his use of architectural design and the individual is only known to play a role of subordinate kind. A great number of work drawn on the spot and printed in red-brown ink has survived the test of time; these are often characterized by a sketchy design.

Zilcken passed away in the year 1930. Nowadays, his work can be admired in museums such as the Amsterdam Rijksmuseum.