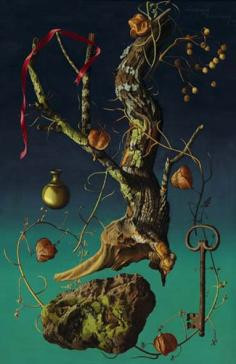 Lodewijk Karel ‘Loki’ Bruckman was born on August 14, 1903 in the city of the Hague. He was known as a Dutch magic realist painter. Throughout his life he has worked in the Netherlands, the United States and Mexico. Bruckman was the son of a house painter. He received his education at the Royal Academy of Art in the Hague, together with his twin brother.

In 1949, Bruckman moved to the United States together with Evert Zeeven, his life partner. He had several gallery exhibitions in this place. In 1968 he found himself back in the Netherlands, where he started to invest his time into life drawing. He is known to have worked figuratively. His subjects included forest views and still lifes with fruit, flowers, eggs, feathers and towels. His working style can be described as realistic, surrealistic or magic realistic.

Besides remaining relatively unknown in the Netherlands, Bruckman gained popularity in the United States. Bruckman passed away April 24, 1995.