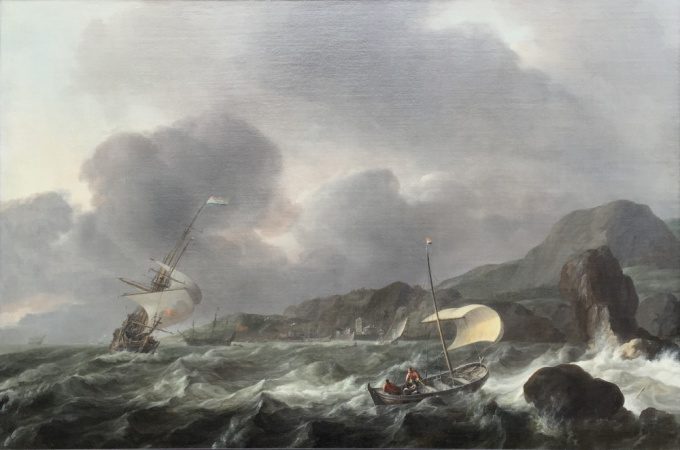 Other title:
'A tempest scene'

signed, lower right (on the small sailing boat in the foreground): L. Back

Catalogue notes:
Near a rocky coastline with a fortified harbour sitting amidst steep rising hills, the rough sea extends. Various vessels of differing type and size are scattered across the scene. In the immediate foreground is a small sailing boat in which three sailors do their best to control the billowing sail while the boat already fills with water. The vessel is only just able to hold its ground as it struggles between the dangerously sweeping waves. From the horizon, clearly defined cumulus clouds stretch up. Diffuse shapes of other massive cloud formations take up the right and upper part of the sky. Ludolf Bakhuizen is the unmistakable master of tempest marine scenes. A born dramatist, he set out to create daring compositions with asymmetrically sinking and lifting horizons which make the beholder search for something to hold on to. Some of his tempest scenes are dismayingly huge canvases of more than three meters in width. The present port scene is datable to the early 1660s and thus belongs to the painter's early period. His admiration for his forerunner, the innovative Simon de Vlieger, is evident in the silvery palette. When Bakhuizen painted this, he was, however, already a highly respected marine specialist in his own right. The present painting is a very important piece of exceptional beauty, which merits a place in a museum or choice private collection.

Ludolf Bakhuizen was born on the 28th of December in 1630. He was born in Emden in East Frisia.
He was a German-born Dutch Golden Age painter who was the leading Dutch painter of maritime subjects after the two Willem van de Veldes (father and son) left for England in 1672.
In 1650 Bakhuizen came to Amsterdam to work as a merchant's clerk and a calligrapher.
He discovered so strong a genius for painting that he relinquished the business and devoted himself to art from the late 1650s, initially in pen drawings. He studied first under Allart van Everdingen and then under Hendrik Dubbels, two eminent masters of the time, and soon became celebrated for his sea-pieces, which often had rough seas.
He was a passionate student of nature, and frequently exposed himself on the sea in an open boat in order to study the effects of storms. His compositions, which are numerous, are nearly all variations of one subject, the sea, and in a style peculiarly his own, marked by intense realism or faithful imitation of nature. In his later years Bakhuizen employed his skills in etching; he also painted a few examples each of several other genres of painting, such as portraits, landscapes and genre paintings.
During his life Bakhuizen was visited by Cosimo III de' Medici, Peter the Great and also worked for various German princes. In 1699 he opened a gallery on the top floor of the famous Amsterdam townhall. After a visit to England he died in Amsterdam on 17 November 1708