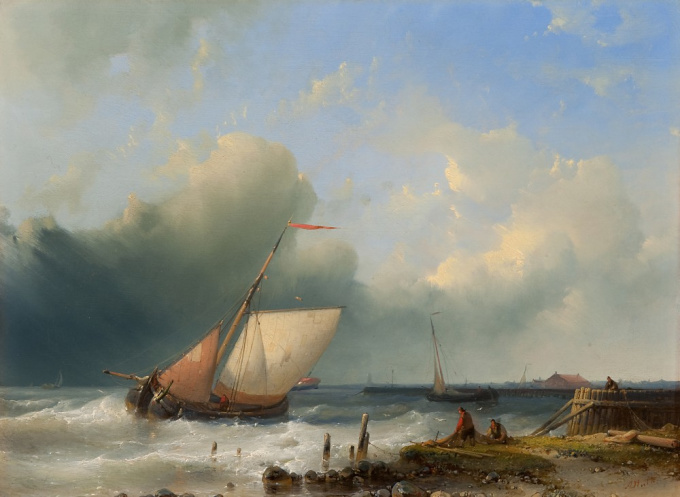 Abraham Hulk, painter and adventurer, was born into a family mainly comprising marine artists. He began making portraits, and to do this left his home town of London in 1833, travelling by schoener to Boston and from there to New York, Albany and Manchester. He then lived in the Netherlands until 1870 where he concentrated on painting seascapes, both in calm weather as well as in a stiff breeze. His style is romantic and bears an affinity to that of J.C. Schotel and Louis Meijer. He was a master at conveying the atmosphere of boats at sea in all kinds of different weather.

Abraham Hulk Senior was born on the 1st of May 1813 in London.
He was an Anglo Dutch painter, drawer and lithograph.

Abraham Hulk Senior became one of the well known marine painters of his time in the 19th century and with that the patriarch of a whole family of Anglo Dutch painters. He studied first to paint portraits under the portrait painter, Jean Augustin Daiwaille (1786–1850) and after that at the Rijksacademie in Amsterdam.

Hulk was the teacher not only to his brother Johannes Frederik but to most of his family members and also to the painter Adrianus David Hilleveld. Abraham Senior married Maria Wilhelmina van der Meulen. There is a similarity between this Hulk family of painters and the Dommersen family of Dutch painters like Pieter Cornelis Dommersen and his son William Raymond Dommersen who also settled in England from the Netherlands and were also all marine painters.

He died on the 23rd of March in 1897 in Zevenaar in the Netherlands.