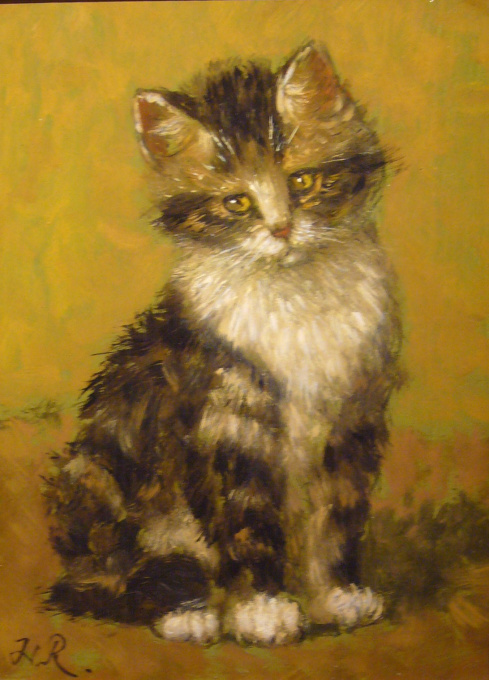 Henriëtte Ronner-Knip was born on the 31st of May in 1821. She was born in Amsterdam.

With her flawless skills she depicted the texture of fur, eyes and colouring, while often capturing the sometimes tranquil, sometimes playful or inquisitive nature of cats. Her work was hugely popular among the 19th century’s burgeoning middle classes. Thus her domestic pets were often shown playing, sleeping or crawling on or over expensive furniture and sumptuous fabrics, so fashionable at the time among the newly rich bourgeoisie. Ronner-Knip was knighted for her work in the Netherlands and Belgium as well.

In her later years, she had a house with a large garden, where she kept hunting dogs, cats and a parrot that she used as models. After observing them in her studio, she would make paper sculptures in the desired poses and set them together with props, such as furniture and fabrics. She occasionally collaborated with the genre artist, David Col.

In 1887, she was awarded the Order of Leopold and, in 1901, became a member of the Order of Orange-Nassau.Her son Alfred and daughters Alice and Emma also became artists. She often exhibited with them.

Henriëtte Ronner-Knip died on the 28th of February in 1909 in Ixelles.