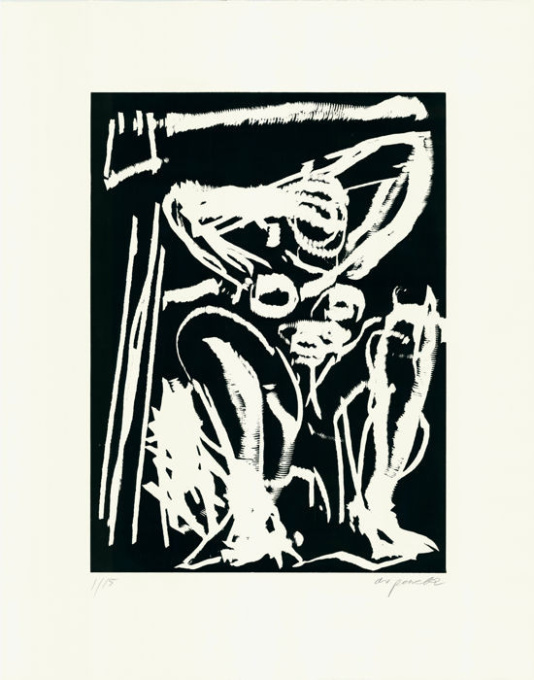 Ralf Winkler, alias A.R. Pence was born on the 5th of October in 1939.
He is a German painter, printmaker, sculptor, and jazz drummer.

Penck was born in Dresden, Germany, and studied together with a group of other neo-expressionist painters in Dresden.

He became one of the foremost exponents of the new figuration alongside Jörg Immendorff, Georg Baselitz and Markus Lüpertz. Under the East German communist regime, they were watched by the secret police and were considered dissidents.

In the late 1970s they were included in shows in West Berlin and were seen as exponents of free speech in the East. Their work was shown by major museums and galleries in the West throughout the 1980s.

They were included in a number of important shows including the famous Zeitgeist exhibition in the well-known Martin Gropius Bau museum and the important New Art show at the Tate in 1983.

In the 1980s he became known worldwide for paintings with pictographic, neo-primitivist imagery of human figures and other totemic forms. He was included in many important shows both in London and New York.

Penck's sculptures, though less familiar, evoke the same primitive themes as his paintings and drawings.

They use common everyday materials such as wood, bottles, cardboard boxes, tin cans, masking tape, tinfoil, and wire, and are crudely painted and assembled. Despite their anti-art aesthetic and the rough-and-ready quality of their construction, they have the same symbolic, archetypal anthropomorphic forms as his flat symbolic paintings.

The paintings are influenced by Paul Klee's work and mix the flatness of Egyptian or Mayan writing with the crudity of the late black paintings by Jackson Pollock. The sculptures are often reminiscent of the stone heads of Easter Island and other Oceanic art.

Pence was also a keen drummer. He was a member and co-founder together with Frank Wollny of the free jazz group Triple Trip Touch (aka T.T.T. or TTT) and took every opportunity to play with some of the best Jazz musicians of the late 1980s including Butch Morris, Frank Wright, Billy Bang, Louis Moholo and Frank Lowe, organising events at his country mansion in Heimbach in 1990 involving installations by Lennie Lee, performances by Anna Homler and paintings by Christine Kuhn.