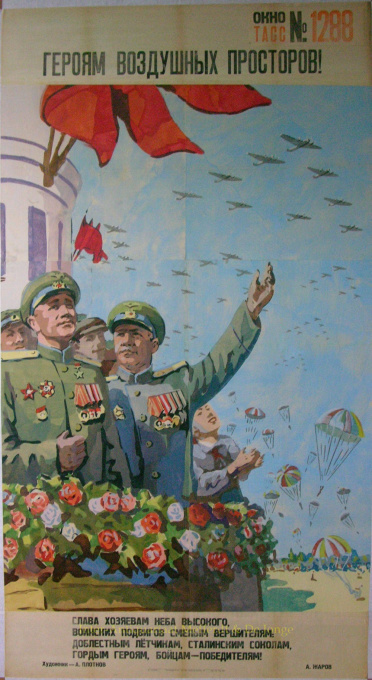 Soviet propaganda poster – TO THE HEROES OF THE SKY! 1945

Soviet propaganda poster – TO THE HEROES OF THE SKY!

“Glory to the masters of the high sky,
To the brave commanders of military exploits:
To the valiant pilots, Stalin’s falcons
To the proud heroes, to the soldierconquerors.”

The major role in Soviet poster art in the war was played by the TASS Windows. They were large, brightly coloured, hand-painted posters, stencilled and produced in runs of up to 1000 copies. They usually were accompanied by a didactic text or often quite lengthy poem. They were the direct descendants of the comparable ROSTA Windows of the Civil War period, so-called because they were displayed in the empty shop-windows of that period. Like ROSTA, TASS was the official Soviet telegraphic agency of the day, and the purpose of the association of this propaganda effort with the agency was both to provide a continuing visual chronicle of the war and to respond immediately, often within hours to the latest telegrams of TASS. M M Chermnykh, who had initiated the ROSTA Windows, also took the lead in the 1941 project. On 24 June the organisational committee of the Union of Soviet Artists established the TASS Window collective and the first poster appeared already on 27 June 1941. The Windows were numbered through to no. 1485 in June 1945. About 1250 were made in the original manner with stencils during the war itself.

The theme and the text of each TASS Window were agreed with the leader of the collective, and ultimately with the agreement of TASS. TASS was the official news agency for dissemination of Soviet news abroad and for reception of news from abroad and consequently was strictly controlled by the Party. Most posters were completed and reproduced within 24 hours, the team working in three shifts. After the artist had completed the drawing and painting of the illustration, the poster was cut up into sections and stencils were cut out appropriate to each colour used in the composition. The most elaborate posters used up to 60 stencils. The stencils were then passed to the copy room where each section was copied on a lithographic machine in waterproof oil colours, initially in very few copies but eventually in up to 1000 copies. When all the colours had been applied to each stencilled section, they had to be glued together to make the completed poster and the text was added in a separate operation.

The Hallward Library of the University of Nottingham holds a large collection of TASS Posters. For more information, the collection is described in detail here.

Andrei Ivanovich Plotnov was born in 1916 in Dankov, Russia.
He was a painter by trade and specialized in portraits and propaganda art.
In 1933 Plotnov moved to Moscow and started studying at the Regional Art School of the Memory of 1905. Then in 1936 he joined the Department of Painting at the Moscow State Academic Art Institute because of the urging of the art critic and future museum director Igor Grabar.
Plotnov was evacuated to Samarkand in 1942 where he completed his studies.
The years following his studies Plotnov drafted and joined the Art Studio of the People's Commissariat of Internal Affairs where he worked under Pavel Sokolov-Skalia.
Between December 1943 and December 1946 Plotnov designed roughly thirty posters for the TASS Studio.
The War marked his return to painting and Plotnov participated in two exceptional creative missions to Central Asia and Kazakhstan in the years 1948-1955 and 1978-1980.
Plotnov was awarded the title of Honored Worker of Arts of the Russian Sovjet Federative Socialist Republic in 1970.
He died in 1997 in his hometown Dankov.