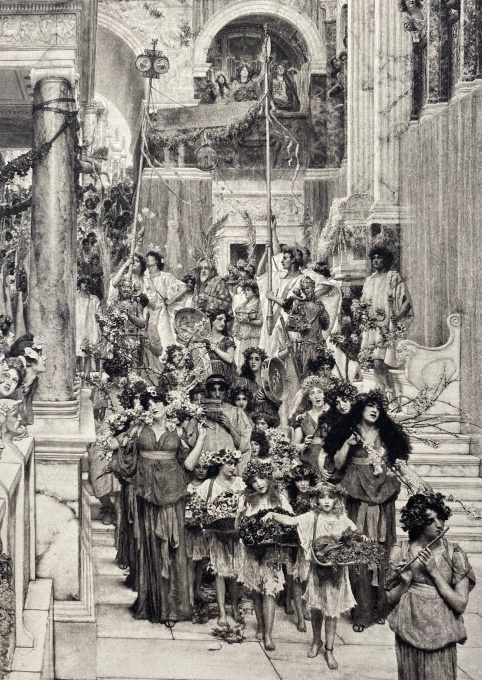 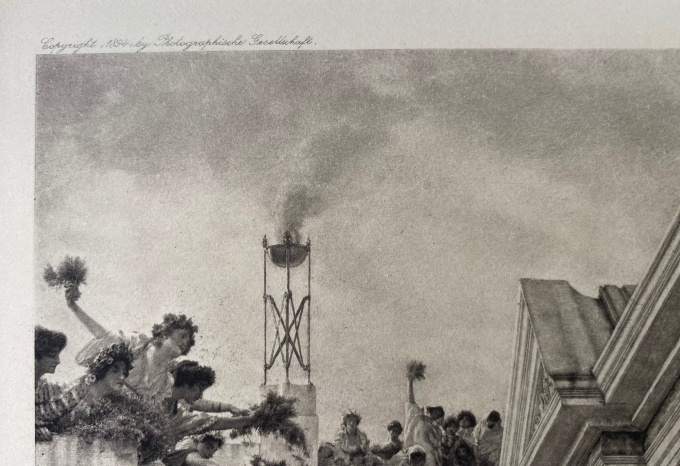 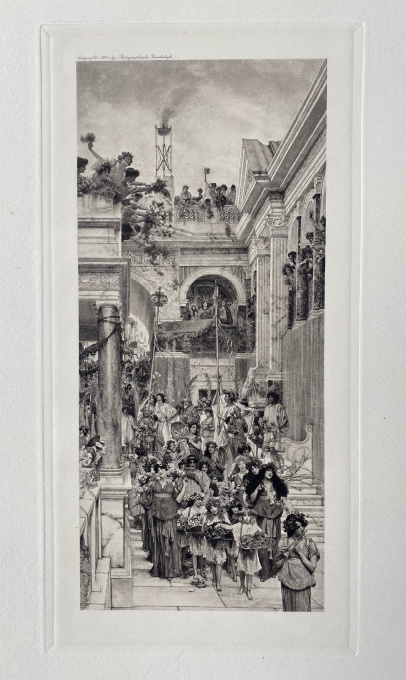 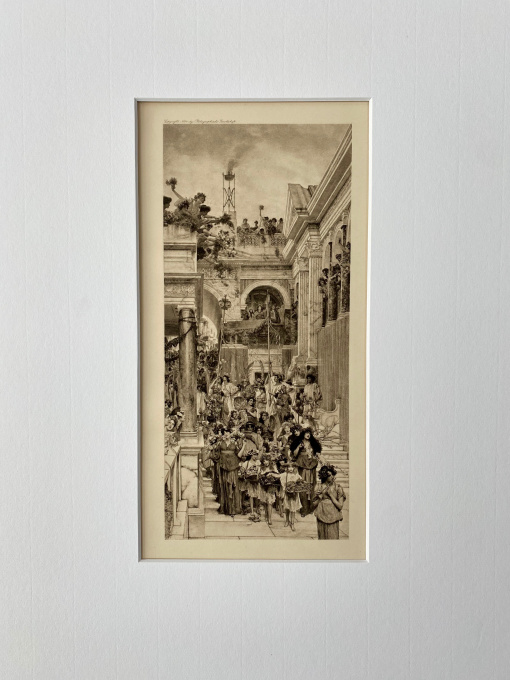 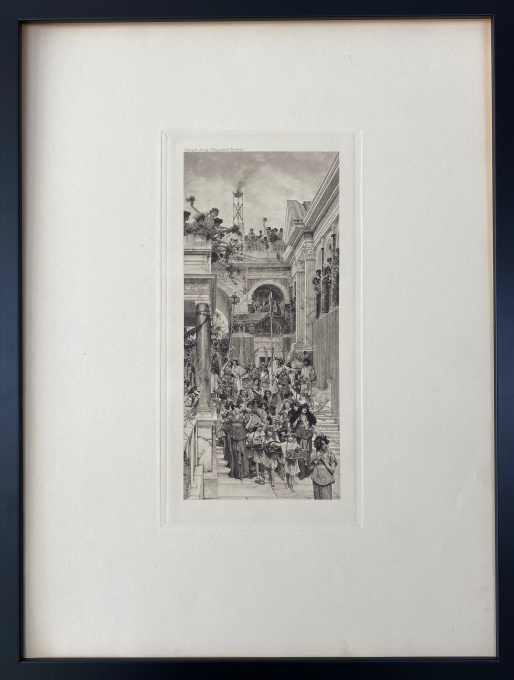 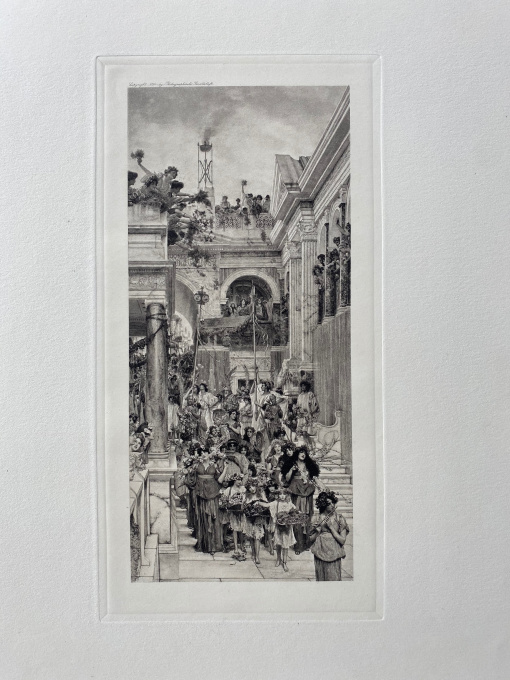 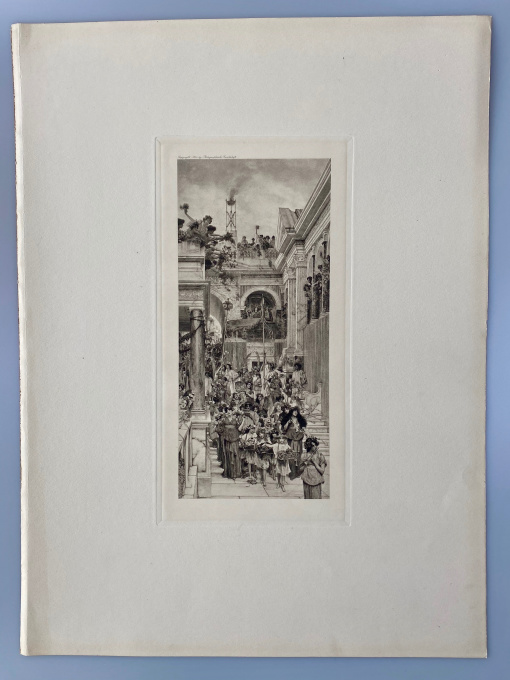 Original photogravure of the painting Spring from Sir Laurence Alma Tadema. Printed in 1894 on thick cream paper in a serie of 400 pieces by 'Photographische Gesellschaft' Image size: 15 cm by 25,5 cm Paperformat: 35 cm by 47 cm The original photogravure depics a procession of women and children descending marble stairs carry and wear brightly colored flowers. Cheering spectators fill the windows and roof of a classical building. Lawrence Alma-Tadema here represented the Victorian custom of sending children into the country to collect flowers on the morning of May 1, or May Day, but placed the scene in ancient Rome. In this way, he suggested the festival's great antiquity through architectural details, dress, sculpture, and even the musical instruments based on Roman originals. The painting was first put on display at the Royal Academy in 1895 and enjoyed great success. The picture's popularity continued over the next few years with prints very much in demand. After a memorial exhibition in 1913, the painting disappeared from the art scene, and it was not until 1970 that it made a comeback. It joined the collection of a certain Mr. Funt, an American TV personality/art collector, and it was subsequently purchased at auction by the Getty Museum in 1972. It was thought at the time to represent the realities of ancient Rome and it took pride of place in the Getty "Roman Villa" in 1974. The apparent authentic "Romanism" of the painting had even inspired certain scenes in Cecil B. De Mille's Hollywood production of "Cleopatra" of 1934. However, further research into the painting's subject and significance suggests it is more an idealised Victorian representation of spring, rather than a specific Roman festival. The scene, with a procession of young people, flowers and musical instruments, is a joyful springtime celebration. It has been likened to the Roman spring festivals: Floralia, Cerealia or Ambarvalia. The artist may have been inspired by descriptions of the spring festival in honour of Ceres or Flora as described by the Roman poet Ovid. It also corresponds to Victorian Mayday festivities, where young girls went out into the countryside and collected flowers, then carried them back in blithesome procession. Alma Tadema presents the scene as a parade in a festive jubilant setting, and it was something the people could relate to. Processions abounded in late Victorian England: receptions for visiting heads of state, royal weddings of Queen Victoria's children/grandchildren, and particularly for the queen's fifty, and then sixty, years of reign. Here, the backdrop is ancient Rome and the procession winds through shining marble passageways. Young girls carry pretty flowers or branches with buds or blossoms. Pipers are making music. Others follow carrying symbolic ritual items, including the bearers of a fine chalice, a casket and an ivory altar. Excited onlookers line the way. These beautifully detailed groups of figures and the surrounding Roman architecture are the key to the painting. Lawrence Alma Tadema was known for his glorious details; it is said that Alma Tadema compositions are the sum of his details. Looking closely, we behold richly ornamented columns and partial columns, full statues that replicate authentic Roman statues in silver and bronze, finely detailed nature elements, and above all, a dazzling feast of delicate yet vibrant spring flowers. The faithfully wrought architecture of this Tadema Rome has numerous columns, arches and balconies to seem almost like a stage set. Indeed, the artist had a background in creating grandiose stage sets for Shakespeare plays in the 1880s that amply satisfied the Victorian taste for spectacle. Against this stage-like background of white marble, and the pale, pastel clothing of the people, the strong bright colours of the flowers and garlands really stand out. The eye goes from one spot of colour to another, then, in the distance, to the red walls of the "royal box", where the viewer pauses to absorb a myriad of refined details. The impact of the picture is the contrast between vibrant colourful flowers and the stark white marble. It is the flowers that provide the most important detail, a detail that reflects the artist's well-known fondness for flowers. However, the flowers in the picture are not all Mayday blossoms; many were selected for their colours and symbolism rather than appropriateness of season. One last detail gives us an insight into the Roman period that Alma Tadema wanted to represent in his celebration of spring: the inscription and relief on the archway at centre left of the picture. The artist has reproduced the dedication sculpted on the Arch of Trajan in Benevento, near Rome, built to commemorate the opening of the Appian Way and completed during the reign of the Emperor Hadrian (reigned 117-138). This leads us to presume that the setting for Lawrence Alma Tadema's joyous "Spring" is Emperor Hadrian's prosperous Rome. Who says that art is a purely visual enjoyment? This gracious painting of "Spring" is full of fragrant air, you can almost smell the faint perfume of the darling buds of May, you can hear the light lilting music, you can feel the warming rays of the sun. "As the sun colours flowers, so art colours life". This was the artist's personal motto, and the idea is present in every Lawrence Alma Tadema composition. Originally from Holland, the young Lawrence, or Lourens as he was originally named, studied art at the Royal Academy of Antwerp. In 1870, he moved to England where he settled permanently in London. He adjusted his name to the more Britannic "Lawrence", and his Dutch origins are often overlooked. Alma-Tadema's paintings also enjoyed popularity later, when his large panoramic depictions of Greek and Roman life caught the attention of Hollywood. Certain scenes in Cecil B. DeMille's film Cleopatra (1934) were inspired by the painting Spring.