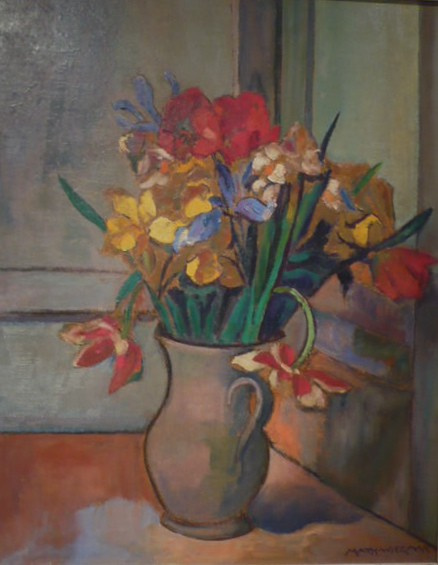 A strong painting of colorfull summer flowers in a simple vase. The shadow of the vase and flowers on the table and wall is very striking.

Mattheus Johannes Maria (Matthieu) Wiegman was an artist of Dutch origin, born in Zwolle, May 31. Throughout his career he identified with painting, drawing, woodcutting and working with watercolours and glass and he has delivered designs for numerous posters and book covers.

A preference for religious depictions can be recognized in his earlier work, but after his graduation of the State Academy of Fine Arts in Amsterdam, where he studied from 1905 until 1909, he became one of the key figures of the Bergen School. Together with Leo Gestel and Arnout Colnot, he his work is thus characterised by an expressionist style, influenced by cubism, with a preference for darker colours. His work became more optimistic in the last twenty years of his life, and Wiegman started using brighter and more uncommon colours.

His most important works remain a selection of still lifes, inspired by his friend De Zarate. Wiegman lived and worked in Bergen, until his death in 1971.