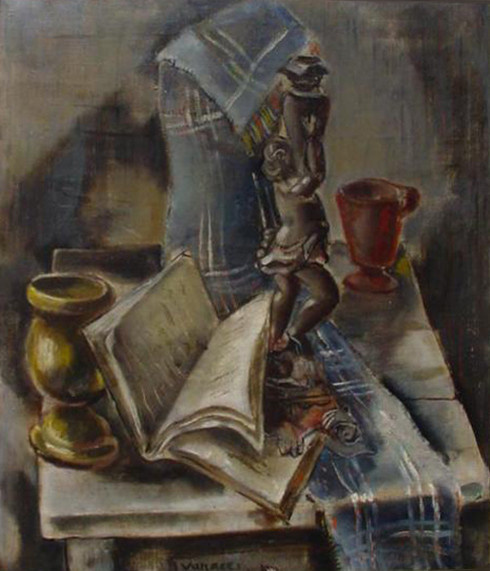 Otto van Rees was a Dutch artist from Freiburg, Germany who grew up in a politically and socialistically engaged family. His father founded an idealistic colony in Blaricum in 1899, inspired by writers and philosophers such as Leo Tolstoj, that had a strong connection with vegetarianists in Ascona, Swiss. Hence, Van Rees grew up in an environment full of artists, philosophers and anarchists. He was tutored by painters Jan Toorop and Herman Heijenbrock and worked in the style of luminism in his early period. Van Rees went to Paris in 1904 upon the recommendation of Jan Toorop. He would soon meet George Braque, Pablo Picasso and Kees van Dongen there, who he would befriend. Van Dongen and Van Rees would work together in a neo-impressionistic style, tending towards fauvism after a trip to Italy in 1905. His works started to tend more towards abstract, probalbly influenced by Braque, which led him to participate in cubistic expositions in Paris and Berlin alongide Piet Mondriaan, Fernand Léger and Henri Le Fauconnier around 1912. In 1915, Van Rees exposed with Hans Arp in Zürich, which is seen as one of the first expressions of Dadaïsm. The horrors of the First World War had an impact on Otto’s work, leading to religious themes.
Towards the end of his career, Otto moved to Bergen and many other Dutch and Belgian villages and started working in a more figurative manner than before, creating religious depictions, still-lifes and portraits. He kept traveling throughout Europe until his death. He is seen as an important person in the Dutch art history, because of his large network amongst the European avant-garde in the first half of the 20th century.