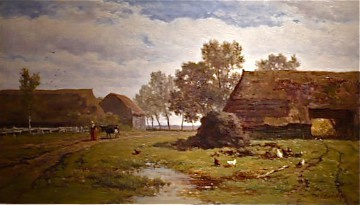 A beautifull fresh landscape with active moving thick white clouds in the blue sky.
The bright red skirt of the woman gives a pretty accent to this lovely work.

Willem Roelofs is regarded as the major forerunner of the Hague School. He painted woodland scenes and broadly arranged landscapes in which he unerringly conveys the openness and flatness of the Dutch polder land with its dykes and cattle under a cloudy sky. Influenced by the French School of Barbizon, he often took himself off to paint directly from nature. In doing so, he was able to capture in a single free brushstroke the continually changing effect of light and shadow on the landscape.

Roelofs was one of the predecessors of Dutch renewal in painting, after the romantic Classicism from the beginning of the 19th century, to the Hague School. But he was not only a painter, but he also drew and made watercolours, etchings and lithographs. Besides being a student at the Hague Academy, he was also a pupil of Hendrikus van de Sande Bakhuyzen.

In 1847 he suddenly left The Hague and went to live in Brussels; he remained there until 1887. From 1866 to 1869 he taught Hendrik Willem Mesdag who became one of the great masters of the Hague School. Willem Roelofs other pupils were Paul Joseph Constantin Gabriel, Jan Theodoor Kruseman, Alexander Mollinger and Frans Smissaert.

In 1851 Roelofs lost his heart towards Barbizon. He only returned there in 1852 and 1855. When he was in Brussels, he helped build the foundation of the Société Royale Belge des Aquarellistes in 1856. Especially his early landscapes were typically influenced by the Barbizon school, with high cloudy skies, atmospheric water features and populated with cattle. He unmistakably transferred his enthusiasm for these nature painters to the later Hague School. For the more significant part of his life he lived in Brussels, but often returned to the Netherlands to paint and gain inspiration.