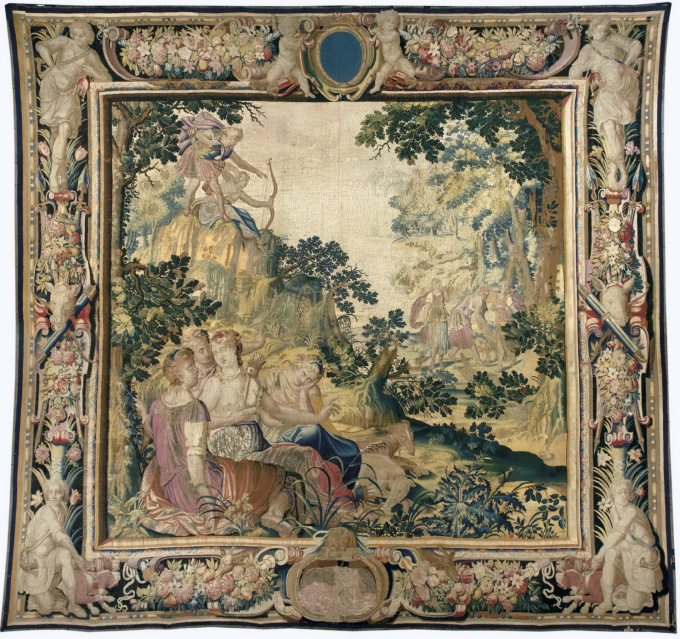 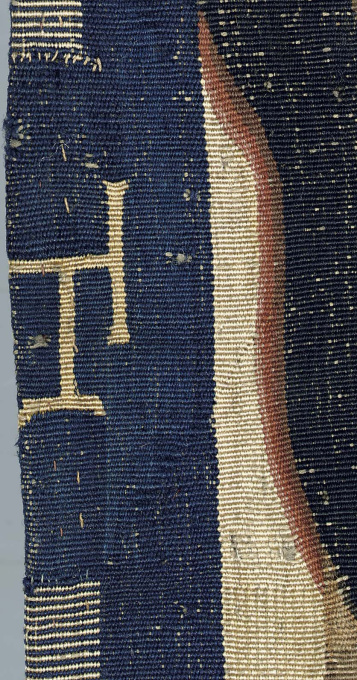 Woven with gold and silver-thread, silk and wool

"A scene with Diana and Orion"
Diana and her nymphs seated in the foreground, behind them Apollo pointing to a dark shade in the water and Diana taking aim at the figure, set within an open wooded landscape, within rich borders with floral swags and hunters and dogs to the angles, the top with a blank blue cartouche flanked by youths, the bottom with a cartouche surmounted by a dog's head and depicting the dead Actaeon before Diana and her attendants, the side borders each with a cartouche with boar's heads, the blue outer guard border with fleur-de-lys flanked by a `P' and with monogram `HT', limited areas of re-weaving.

This tapestry is virtually identical, both in the design and size, to one that formed part of the series of The Story of Diana that belonged to cardinal Richelieu and which was recorded in his inventory in 1642. The series was one of the five most expensive items in the inventory of the Palais with a total of 1364 items listed, including all the silver, jewellery and paintings. Ultimately the set of tapestries was bequeathed to Louis XIII and it is then recorded in the Royal inventories in 1663 along with two other sets, both bearing the Royal
coat-of-arms. The Richelieu set had a plain blue field in its place as on the example of the Wildenstein collection. Richelieu's tapestries were recorded in 1789 in the apartments of the duc and duchess d'Orleans. Recently the Richelieu set was identified as being that in the mobilier national by Piero Boccardo (`Decouvertes a propos de l'Histoire de Diane de Toussaint Dubreuil', La tapisserie au XVIIe siecle et les collections europeennes, Paris, 1999, pp. 53 - 54). This tapestry therefore forms part of a commission that has not yet been identified.

Hans Taye or Jean Tayer was a South Nederlandish/Flemish tapestry weaver, active between 1619 and 1627. He made Flemmish tapestries in baroque style for France and was active in Paris. He led a 'boutique d'or', a workshop where the most precious pieces were manufactured.