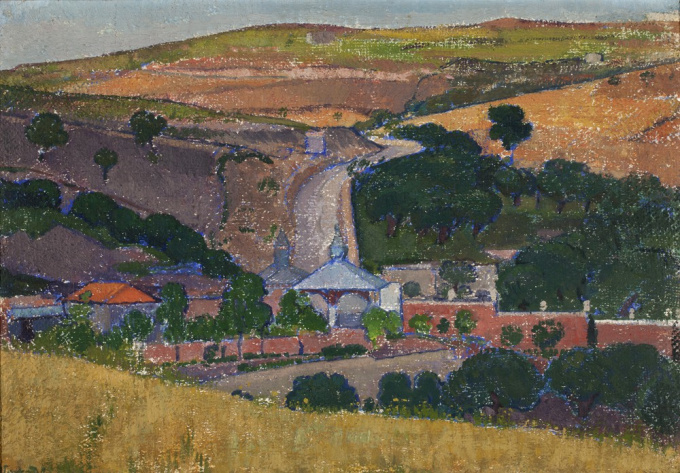 Jan Verkade was a pupil of Paul Gauguin, friends with Maurice Denis en Pierre Bonnard and belonged to group of expressionistic painters called the 'Nabis'. This beautiful little painting 'The road to Gethsemani' (Oil on canvas /Marouflé, signed. ) was painted around 1909-1910. It was exhibited at the exhibition 'Reiskoorts' in Museum De Hallen at Haarlem

Jan Verkade, born in 1868 in Zaandam, the Netherlands, was known as a Dutch painter who concentrated his activities in around Paris. He is often associated with Paul Gaugin as well as Paul Sérusier. After he became friends with Sérusier, he was introduced to Les Nabis, a Post-Impressionist avant-garde artists who set the pace for fine and graphic arts in France in the 1890s.

A fascination with the Breton landscape, because of its opposition against the Dutch landscape Verkade was familiar with, is clearly recognizable in his work. Religion and theosophy were major points of concern in the mind of Verkade; his spiritual journey led him to convert to Roman Catholicism and take Orders as a Benedictine monk: Jan Verkade became known as Willibrord Verkade in 1902. Sources say he was sent to Jerusalem to work on a number of murals depicting the Assumption of Mary into heaven, but his work was not appreciated there. Upon his return to The Netherlands he had lost all inspiration he previously thrived on and he fell into retreat until his death in 1946.