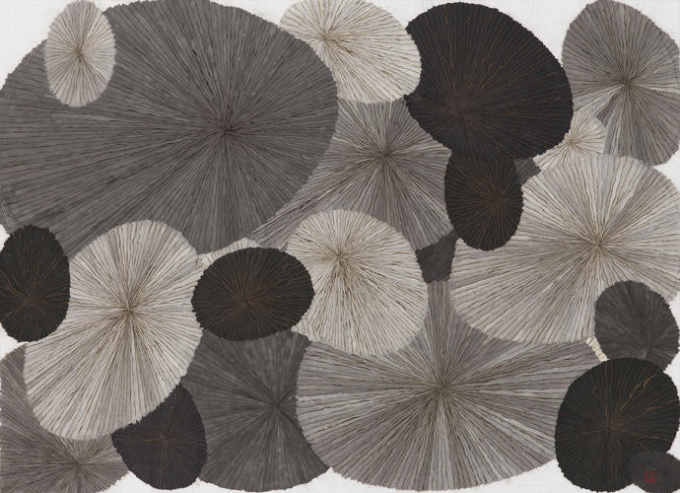 Born in 1962
Gwangiu in the Republic of Korea


From the age of six, her family encouraged her to study painting under various teachers, including the famous watercolorist Yeon gyun Kang, and, between the ages of thirteen and twenty-nine, Oriental calligraphy. This latter study allowed her to understand the fundamental precepts of Asiatic speculative tradition.
The study of calligraphy did not just endow Minjung with this vision of the world but also taught her to communicate by means of the extremely controlled use of the brush, which “channels” the energy and directs it onto the paper.

When in 1980 she enrolled in the Hong Ik university in Seoul, Minjung had already received a very thorough artistic education which was completed trough the detailed study of Oriental painting under Taejun Ha, Sunam Song and Sukhchang Hong. Once her university course had been completed in 1985, she took a Master’s degree at the same university with a thesis on the four basic material in ink painting (rice paper, brush, ink pigment and the pigment grinding stone).
In 1991 she decided to move to Italy and enroll at the Brera Academy in Milan. Here she studied the analysis of the works of Western artists who, during the 20th century. In particular, certain works by Paul Klee and Franz Kline prompted her to approach a new aesthetic direction that look her progressively away from the figurative tradition of her country of origin towards an investigation of the expressive value of marks and maculas, two stylistic elements that combine perfectly with the ‘process-based view of the world’ and the ability to ‘channel the energy’, both of which she learned in her study of calligraphy. This change of direction was also dictated by her attending courses at the Brera Accademy held by Maurizio Bottarelli, who focused his lectures on the perceptive quality of maculas and on experimentation in watercolors techniques.
Her exploration of the interrelationship between Oriental and Western techniques and conceptions continues outside the Academy. In her pictorial work – which she always executes on the floor in keeping with Oriental tradition, because both literally and metaphorically the floor is the basic support for all painting – Minjung tends to use increasingly concentrated watercolors in order to express effectively the intensity the colors contain. Furthermore, in her works made during 1998 on overlaid layers of paper, to generate an effect of three-dimensionality, to provide the viewer with a chronological dimension, and to indicate layers of time symbolized by the layers of paper.

Minjung currently lives and works in Italy, France and the United States.