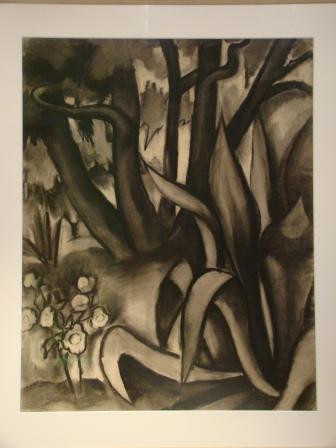 Else Berg was a German born Dutch painter with a Jewish background. She is considered to belong to the Bergen School, a Dutch art movement that is characterised by an Expressionist style with Cubist influences and a dark color palette. She was also inspired by Cubism and Luminism. In 1895, she began studying at the Royal Academy of Fine Arts in Antwerp. A few years later, Else decided to study at the Berlin University of the Arts, where she met Mommie Schwartz. They travelled to Paris and Amsterdam together and decided to settle there. She married him in 1920, thus becoming a Dutch citizen. She befriended Charley Toorop in Amsterdam, influencing her color palette in such a way that her tones became less vivid and bright. Mommie and Else traveled through Europe together, visiting regions such as France, Italy and Eastern-Europe. In Italy, she met Leo Gestel, whom she befriended. This friendship lead to an interest in Cubism. Other prominent friends of Else Berg that had an influence on her style were Piet Mondriaan and Jan Sluijters. During the Second World War, Else felt safe in Amsterdam, despite of her Jewish background. She was deported in 1942 and died soon after in Auschwitz. She is considered to be one of the greater Dutch modern artists.