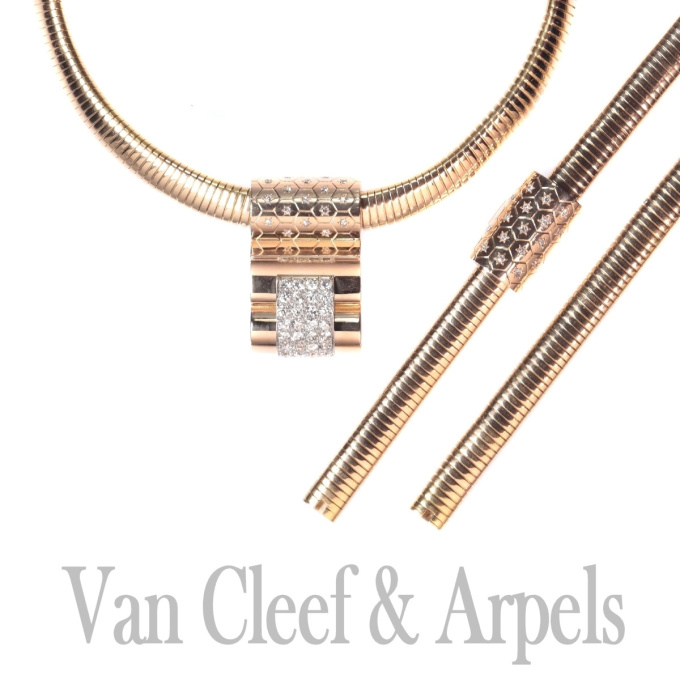 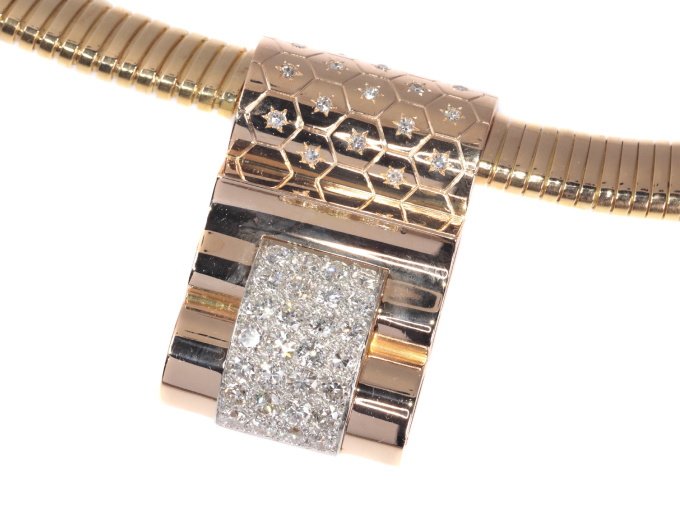 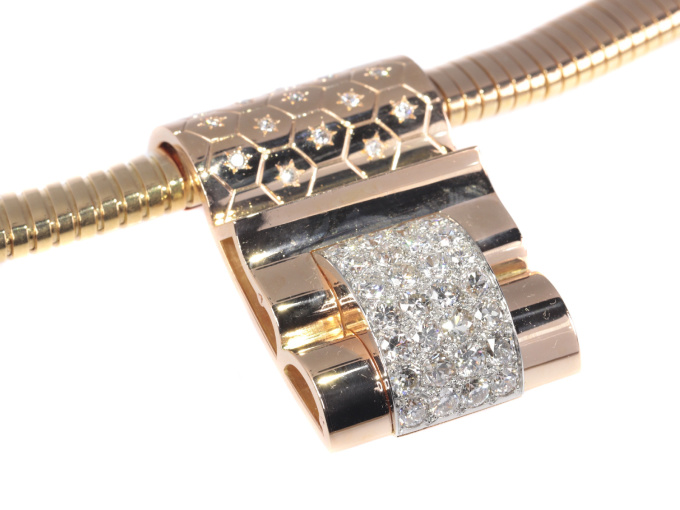 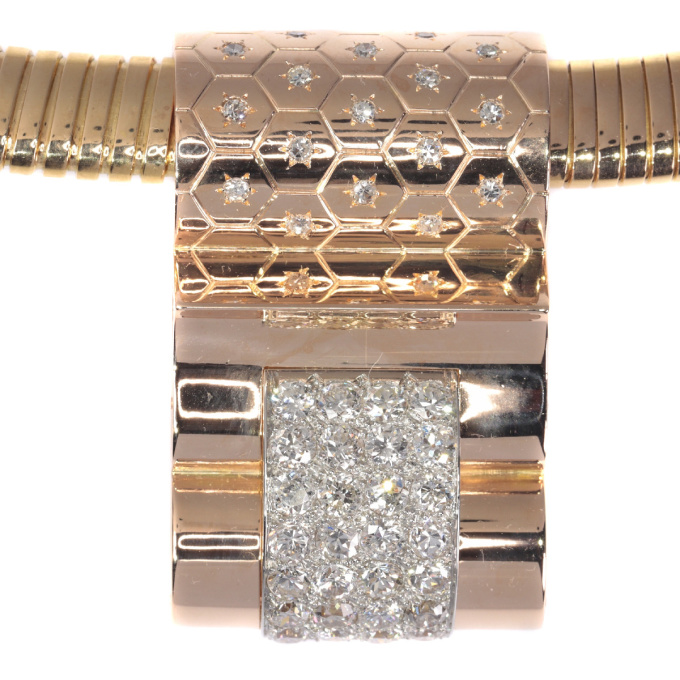 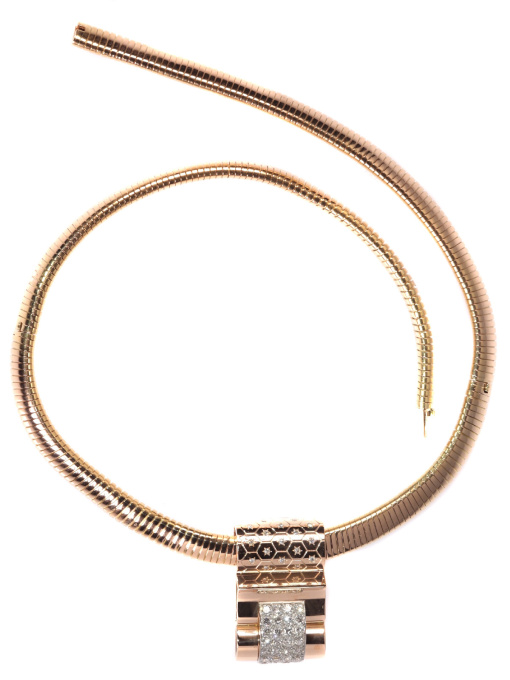 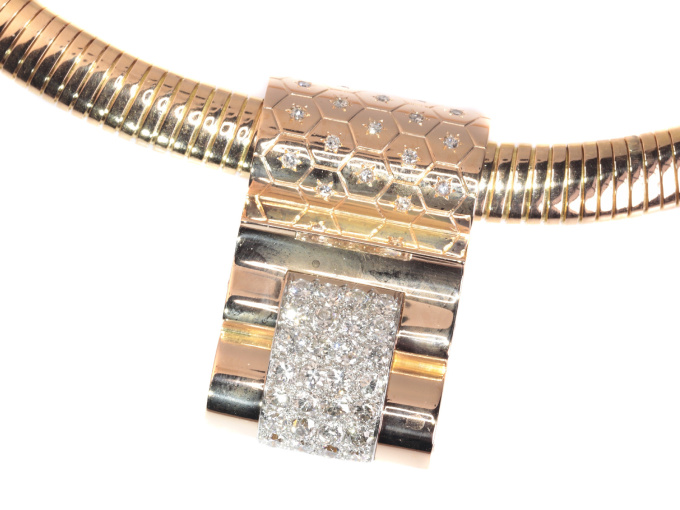 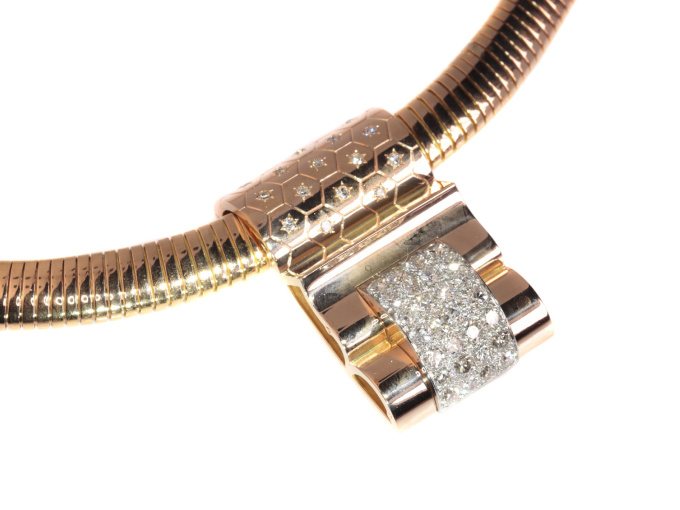 These model clips first entered Van Cleef & Arpels’ collection in 1935 and were named Ludo Hexagone.(Louis Arpels, who was known to his friends as “Ludo”).

This extraordinary VCA jewellery set can be assembled in different fashions. It consists of four separate 'Tube de Gaz'-bracelets, that are each signed by Van Cleef and Arpels and that can be connected to each other in various desired lengths. Thisoffers you to possibility to combine them into one long necklace or to leave it as a shorter necklace while wearing the remaining parts as bracelets.
Furthermore, a large and luxurious as well as a more modest pendant come with this set. Both comfortably slide across the 'Tube de Gaz'-parts and can so serve as the finishing touch to your necklace. The smaller pendant can even be worn as an extradecoration for your bracelet as well.

Style specifics: This is a so-called 'tube de gaz' necklace (Frenchfor 'gas tube') and is a typical jewellery piece for the 1950's. Besides that, it's also a statement example that not all necklaces are made out of links.A 'tube de gaz' is traditionally made from two long twisted U-shaped wires, twisted into each other. One side of the necklace is round and the other side is flat. Another designation for jewellery made according to this technique is 'rat tail'.

Source of inspiration: honey comb - We can see this pattern in the pendant and tha slide.

Extra information: Van Cleef & Arpels - Their first jewellery store was created in 1906 by Charles, Julien and Louis Arpels, in partnership with their brother-in-law Alfred Van Cleef. They soon reached international recognition and in 1942, they had the possibility toopena another store in New York on the famous Fifth Avenue.

- All diamond weights, color grades and clarity are approximate since stones are not removed from their mounts to preserve the integrity of the setting. Also we have all diamonds screened by the IJGC - lab(www.ijgc-worldwide.com) for whether they are natural or synthetic, and all diamonds in this jewel are 100% guaranteed to be natural!

Signature: Van Cleef & Arpels
The big pendant and the slide seem to have been born as a so-called double-clip.Also, although the bracelets are signed, both the pendant and slide are not. However, they both are known as typical VCA pieces. We think that their signatures have been sacrificed during their modification necessary for this jewellery set.

Engraving:
-In two of the bracelets, we find the engraving 'Van Cleef & Arpels'.
-In the other two, we can find their series number '1.138.C.S.' engraved.

Hallmarks:Hallmarks: The French control mark for 18K gold representing an eagle's head (that was in use in France from about 1838)
-  (more info on hallmarks)

Van Cleef & Arpels is a French company, producing jewelry, watches and perfume. Van Cleef & Arpels was established in 1896 in Paris by Alfred Van Cleef and his relative Salomon Arpels. In 1906, although Arpels had already passed away, Van Cleef opened their first boutique store at 22 Place Vendome, opposite the Hotel Ritz. All three sons of Arpels, named Charles, Juilien and Louis, joined the company in name of their late father.

Soon, the company began to open boutiques in a number of resorts such as Deauville, Vichy, Le Touchet, Nice and Monte-Carlo. In 1925 Van Cleef & Arpels won first prize at the International Exposition of Modern Industrial and Decorative Arts, for a design for a bracelet of white and red roses, executed in a combination of rubies and diamonds. Van Cleefs daughter Renee Puissant, born Rachel, took over the artistic direction of the company. She maintained close connections with draftsman René Sim Lacaze for over twenty years. The company was the first to open international boutiques in Japan as well as China. In 1999, Compagnie Financère Richemont S.A. acquired the firm.

The pieces of Van Cleef & Arpels can be recognized through use of flowers, animals and fairies. They have been worn by style icons such as Farah Diba, Grace Kelly, Elizabeth Taylor, the Duchess of Windsor, and Jordan Paterra.