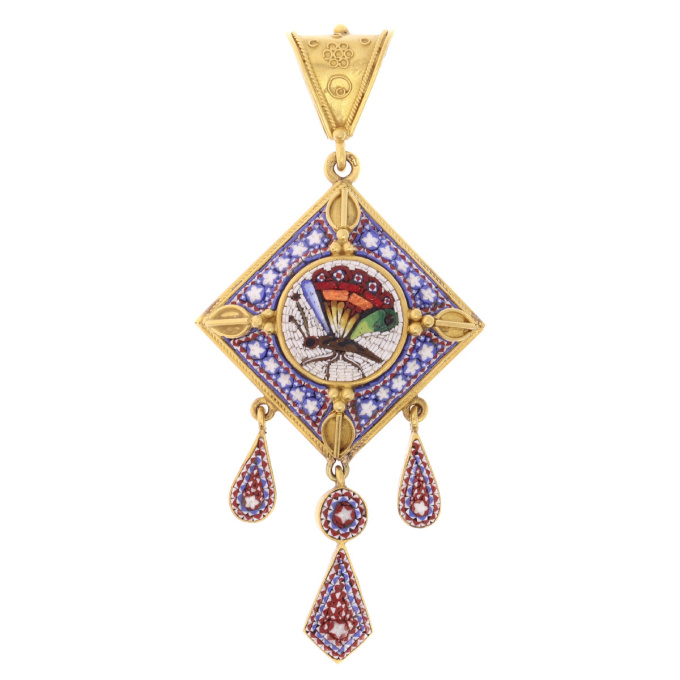 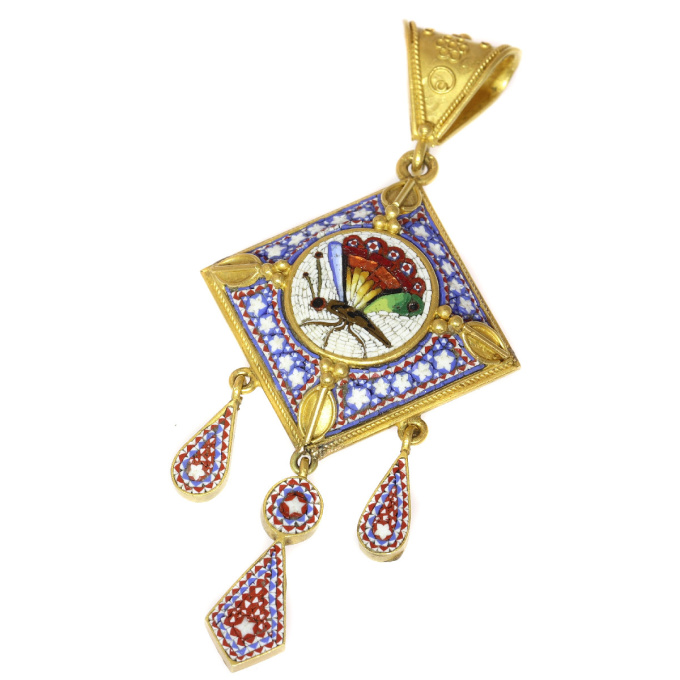 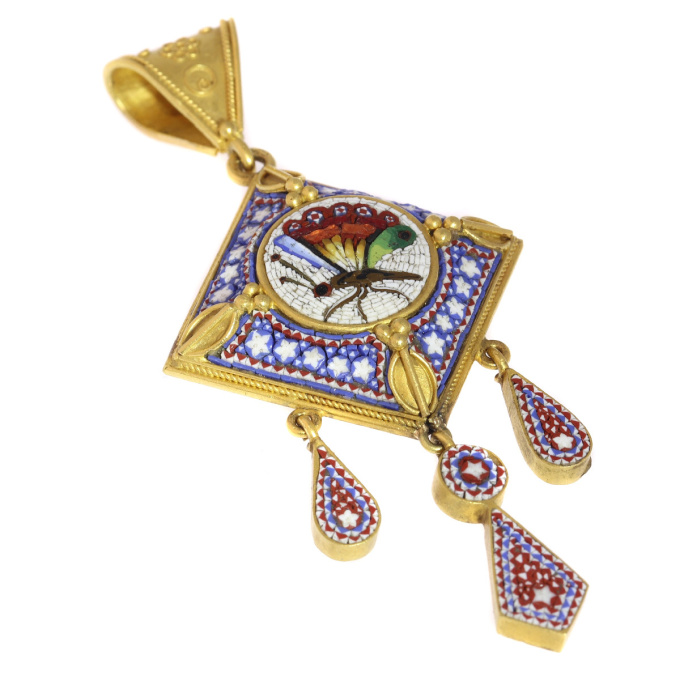 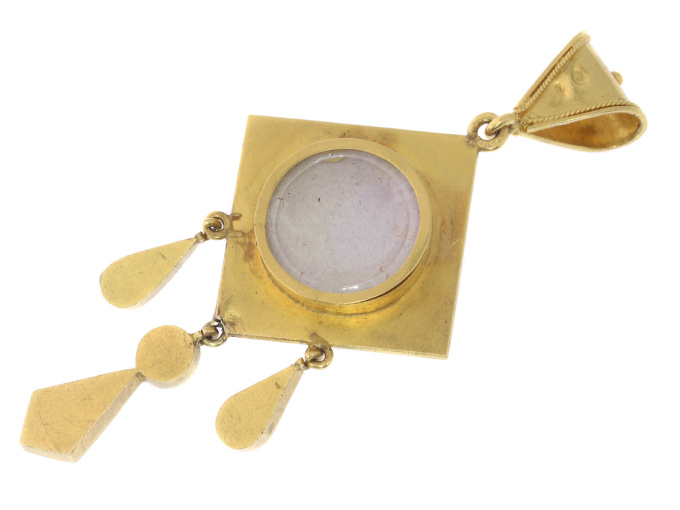 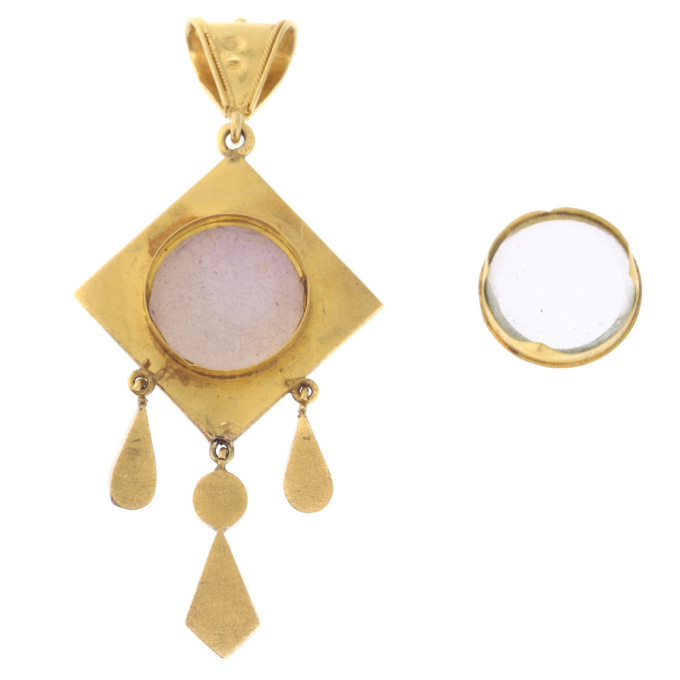 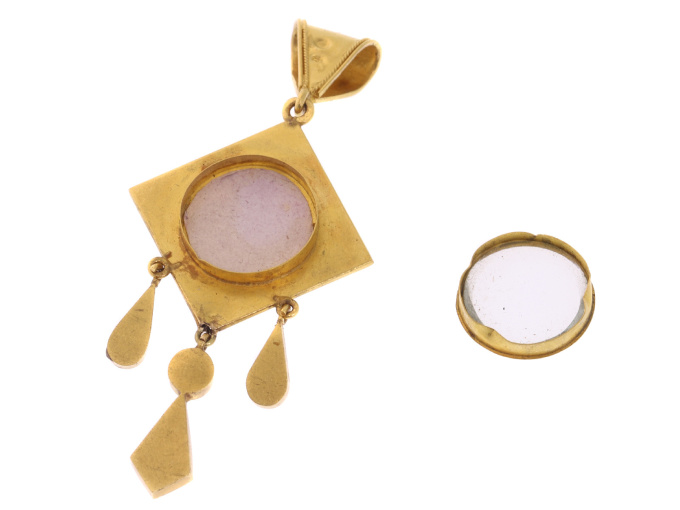 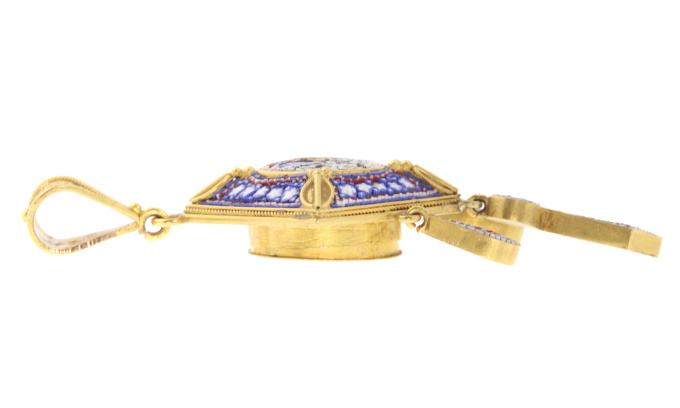 Victorian micromosaic pendant with compartment in the back 1860

This square-shaped 18K yellow gold Victorian pendant from 1860 depicts a mosaic butterfly with wings of blue, green and yellow to red glass inlay work on a white background. While the corners of the square have gold oval ornaments with granules, theborders consist of an alignment of white flowers surrounded with blue, red and white triangular smalti filati pieces crafted from a stretched glass thread. With similar mosaic patterns in the two dangling pears and the central swinging circle topping alozenge, this jewel suspending from a filigree surmount couldn't be a more innocent disguise for the safeguarding of your secrets in its hidden compartment on the back.

Country of origin:Although it does not carry any legible control marks we believe this to be of French or Italian origin.

Technique: This jewel features a filigree decoration, which is in fact thin gold wire twisted into refined motifs, in this case elegant little balls. You can also notice the use of granulation on this piece. Granulation is a technique where the goldsmith usesvery small balls (granules) of metal, which are not soldered to the piece but welded. Both techniques demand very high skills and precision from the maker.

A decorative object or architectural element made from relatively uniformly sized pieces of hard substances fitted together and embedded in a matrix of some adhesive or bonding substance that eventually hardens to hold the pieces in place. The wordderives from the Greek word for the Muses, implying it is a form of artistic expression.
SMALTI FILATI: Filati means “thread” in Italian. Smalti filati literally means thread tesserae. The opaque enamel is heated and pulled out to make long thin strands shaped similar to spaghetti or linguini. These are then broken into shorter pieces called tesserae. These originated about mid 18th century at the Vatican Mosaic Workshops.
Smalti - Flat rectilinear tesserae made by pouring molten opaque colored enamel onto a steel slab, allowing it to cool, and then cutting it into small flat or cubed pieces called tesserae. The smalti are composed of silica, an alkaline substance suchas soda or potash, lead, metal oxide coloring agents, and tin oxide for opacity. Opaque tesserae were desirable to avoid a shiny reflective surface when using mosaics as copies of paintings in St. Peter’s Basilica. Smalti means “enamels”(smalto meansenamel) in Italian, but used in English as a singular term, enamel. We say micromosaics are made of enamel, not “enamels.”
Support - The supportive backing for the mosaic, its material depending on the size of the art work. In small pieces such as jewelry, the backing was made of a metal such as a copper tray with a rim, or of glass, goldstone, or small plaques of marble,which were hollowed out to the proper depth to hold the mosaic. For larger scale pictures, the weight necessitated use of slate or marble, similarly hollowed out, or iron surrounded by a rim.

Extra information: Butterflies - According to the "Butterflies" chapter in Kwaidan (a book by Lafcadio Hearn that features several Japanese ghost stories and a brief study on insects) a butterfly is seen as the personification of a person's soul; whether they be living,dying, or already dead. One Japanese superstition says that if a butterfly enters your guestroom and perches behind the bamboo screen, the person whom you most love is coming to see you.
The Russian word for "butterfly" (bábochka) also means "bow tie". It is a diminutive of "baba" or "babka" (= "woman, grandmother, cake", whence also "babushka" = "grandmother".
The Ancient Greek word for "butterfly" is psyche, which primarily means "soul" or "mind".
In Chinese culture two butterflies flying together are a symbol of love. Also a famous Chinese folk story called Butterfly Lovers. The Taoist philosopher Zhuangzi once had a dream of being a butterfly flying without care about humanity, however when hewoke up and realised it was just a dream, he thought to himself "Was I before a man who dreamt about being a butterfly, or am I now a butterfly who dreams about being a man?"
In some old cultures, butterflies also symbolize rebirth into a new life after being inside a cocoon for a period of time.
The idiom "butterflies in the stomach" is used to describe a state of nervousness and some people say that when a butterfly lands on you it means good luck.