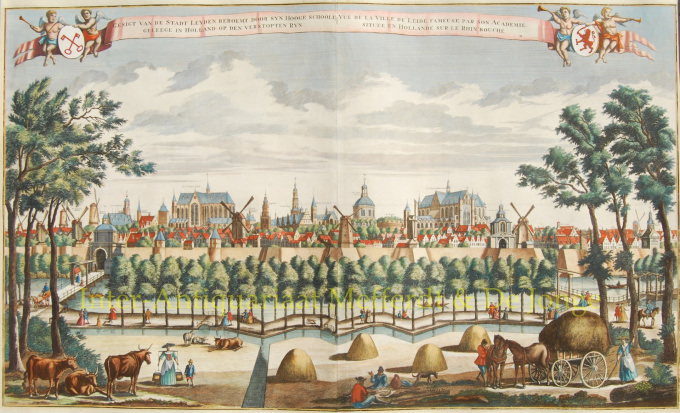 Etching and copper engraving printed from two plates, made c. 1730 by Leon Schenk after the design of Abraham Rademaker. Coloured by a later hand. Size (print): approx. 57 x 97 cm.

Abraham Rademaker (1677 – 21 January 1735) was an 18th-century painter and printmaker from the Northern Netherlands. He was a draughtsman, painter, printmaker, and print-dealer Abraham Rademaker left behind a large oeuvre in topographical and, landscape drawings and prints. According to the Dutch RKD he was a versatile painter. He is known for his city scapes and houses and castles that were made into print (over 350 different ones). As well he painted italianate landscapes. He died at an age of 57 in the city of Haarlem.
His techniques and characteristic stylistic features are discussed. After the primary source Van Gool (1750) biographical information has become increasingly incorrect in handbooks. Rademaker was born in 1667/77, not in 1665 as has hitherto been assumed.