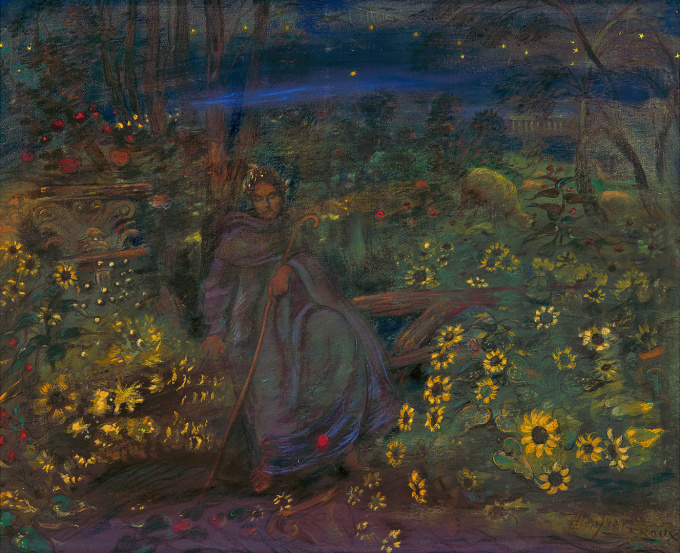 Henri de Groux (1866-1930) is a Belgian sculptor and painter who is best known for his symbolist compositions towards the turn of the century. De Groux studied at the Académie Royale des Beaux-Arts. He is the prime example of an 'artiste maudit'. Throughout his life, De Groux struggled with psychological problems, partly caused by his difficult childhood that was marked by the early death of his father and his family's financial problems. The naturalistic writer Émile Zola became a close friend of De Groux. In 1886, De Groux was featured in an exhibition from the art collective L'Essor, which led to his admittance to the Avantgarde group Les XX. He would successfully exhibit alongside artists such as Georges Seurat, Camille Pissarro, Auguste Rodin and Fernand Khnopff. His 'magnum opus' was an immense work called 'Le Christ aux outrages', wherein he identified himself with the misunderstood and suffering Christ.
He distanced himself from the impressionists and refused to expose alongside Vincent van Gogh's Sunflowers. After completing his masterpiece, de Groux focused on painting portraits of portraits of people he identified himself with, such as Émile Zola, Napoleon and Charles Baudelaire. He found inspiration in great poets such as Vergil, Dante and composer Wagner. De Groux mainly created heroic and apocalyptic paintings, depicting battles and body piles. After the first World War, De Groux created over three hundred drawings concerning the horrors of war. The fact that De Groux based his drawings on self-made war-photos is widely acknowledged. He was obsessed with the apocalyptic strangeness, the absurdity and the fury of war.