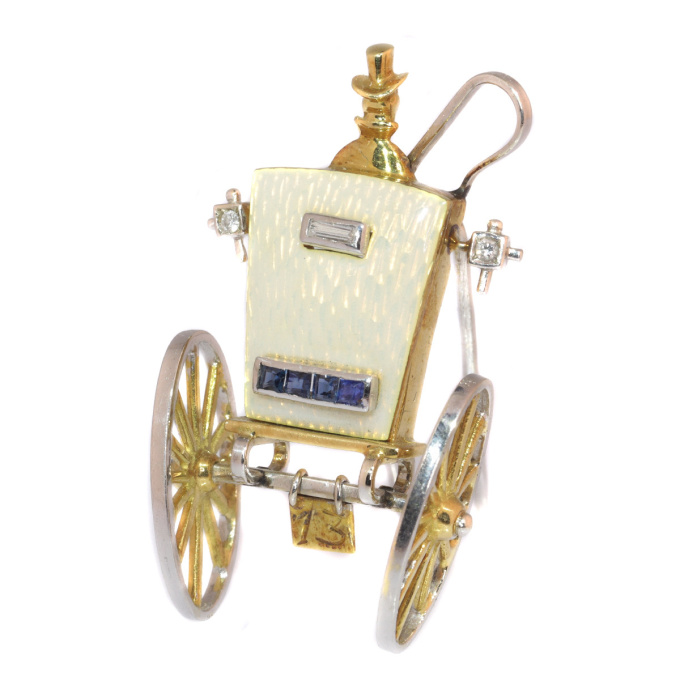 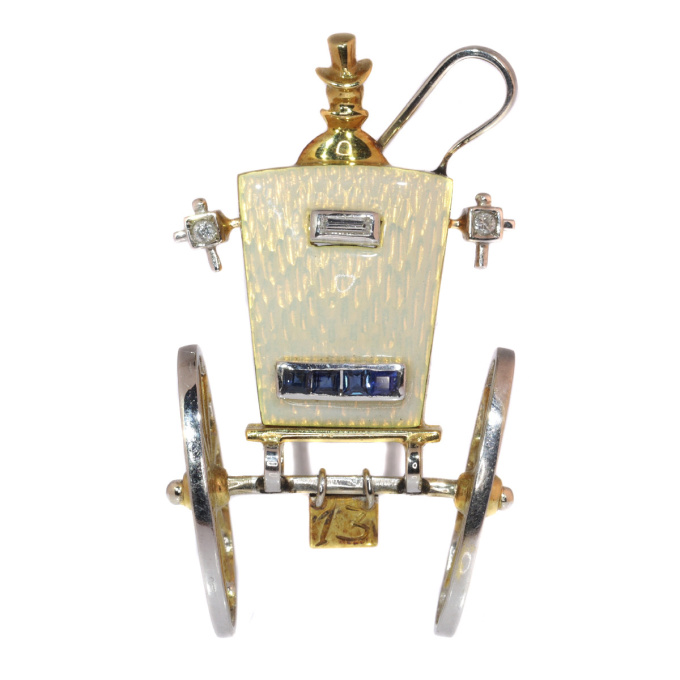 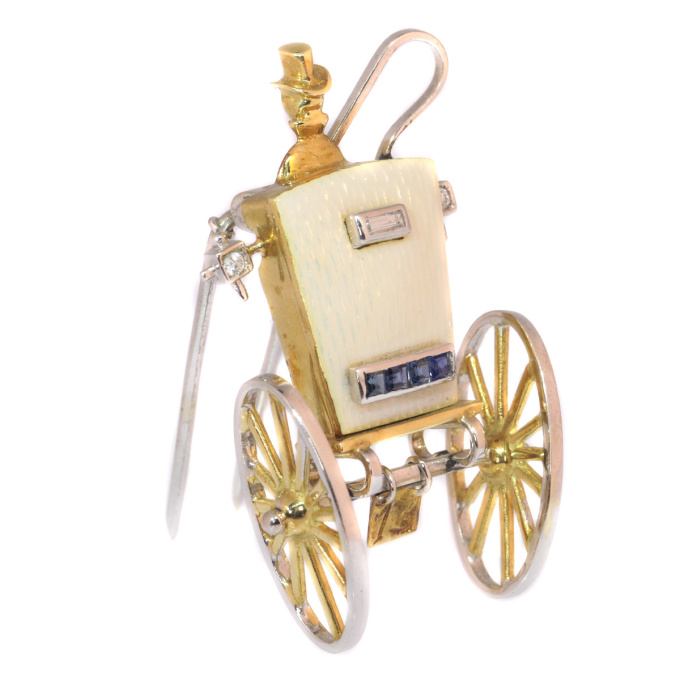 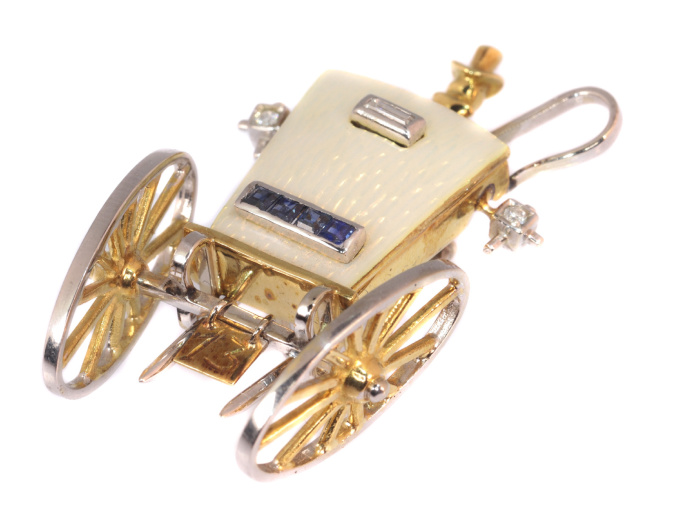 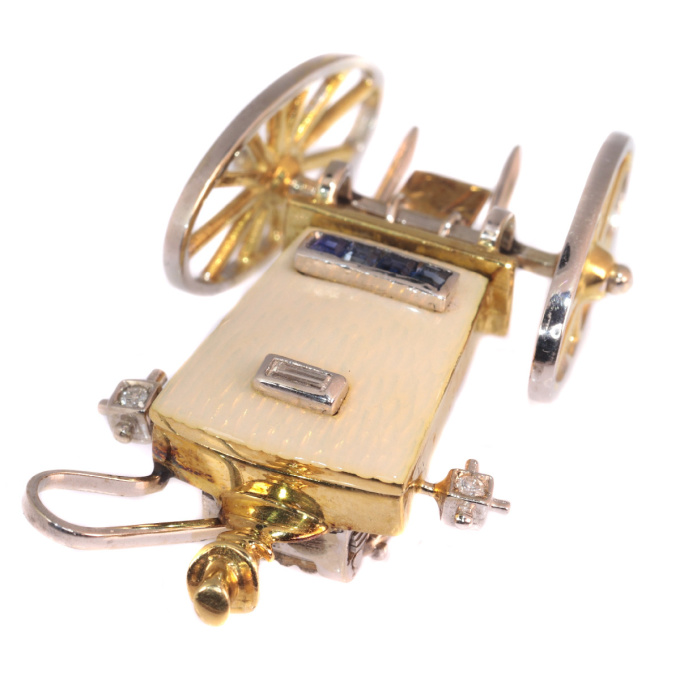 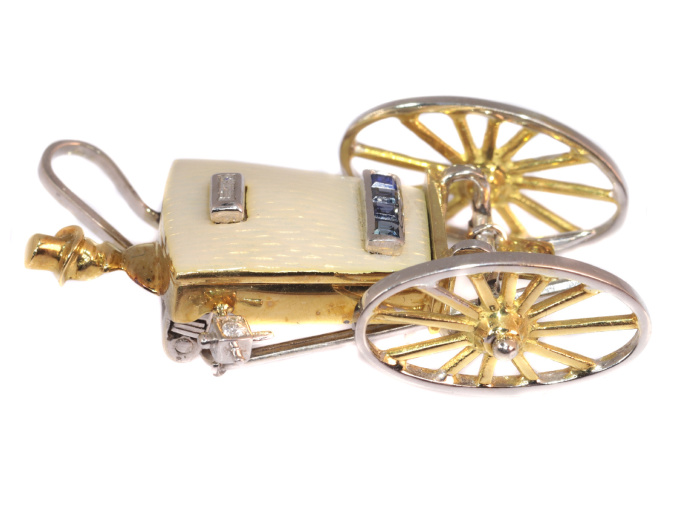 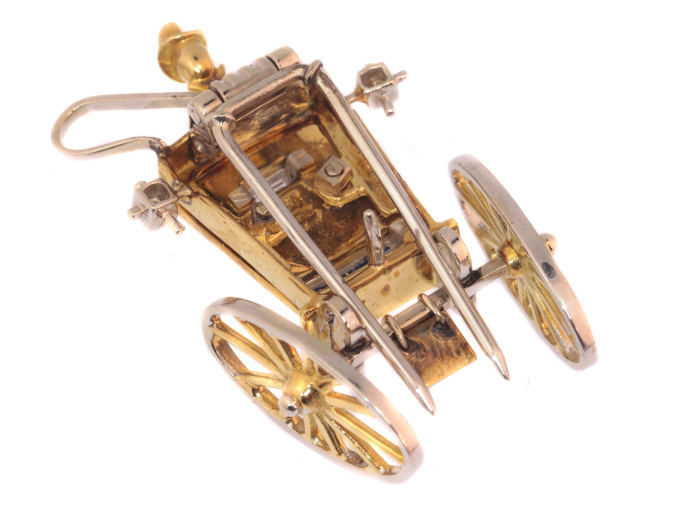 Looking forward to whatever road lying ahead, this Italian Fifties 18K gold carriage built in Mellerio style has the ability to carry you to any gala you could ever imagine.

As your fairy godmother, Adin promises that the coach won't change into a pumpkin, so even after midnight you can count on these white gold wheels to take you away in this yellow gold frame with diamonds and sapphires embedded inwhimsical opaline enamel as the white gold lanterns light your path. However, the driver's got a mind of his own, being a former horse as you know.

Style specifics: This type of jewelry is very specific for the fifties of the twentieth century. All sorts of animals were used as source of inspiration for the goldsmiths. Made in gold and decorated with enamel and precious stones, the result of their labour most ofthe times well-made, clever and cute.

Source of inspiration: Although this jewel is NOT signed Mellerio it has all characteristics of atypical Mellerio jewel. Even more, this model is typically a Mellerio model.

Extra information: Mellerio - François Mellerio (1772-1843) created the foundations of the current house, MELLERIO dits MELLER. Set up at 4, rue du Coq-Saint-Honoré (today rue Marengo), his establisment rapidly grew under the Empire, thanks to Empress Josephine who bought small items from him and attracted in her wake the Emperor's family, the new nobility and the old aristocracy standing together. In 1815 at the end of the Empire, he transferred the house to 22, rue de la Paix and in the following year went intopartnership with his brother Jean-Jacques. Highly prized by the Orleans family, his most important customer, Mellerio was elevated, after the accession of the Duc d'Orléans to the throne in 1830, to the rank of official supplier to Queen Marie-Amélie,King Louis-Philippe and the royal family.

During the period of the economic crisis caused by the 1848 Revolution, the two brothers thought up the project of setting up an establissement in Spain, which was accomplished in 1850 with the opening of a shop in Madrid "Mellerio-Hermanos" whichrapidly received large orders from Queen Isabelle II and the grandees of Spain. The Second Empire was one of the finest periods for the Mellerio house in Paris. Worthy heirs of their forebears François (born in 1943) and Olivier (born in 1945) thecurrent managers are carrying on this high level of know-how, which warrants that the House is a member of the Comité Colbert and the High Jewelers of France.
(Check our glossary for more info on Mellerio)

- All diamond weights, color grades and clarity are approximate since stones are not removed from their mounts topreserve the integrity of the setting. Also we have all diamonds screened by the IJGC - lab (www.ijgc-worldwide.com) for whether they are natural or synthetic, and all diamonds in this jewel are 100% guaranteed to be natural!

Precious stones: Four sapphires. We did not check if the sapphires are lab produced or not as this information has no influence on the value of this jewel. Natural sapphires and lab produced sapphires were both used in this era, rather more for their effect than for their intrinsic value. with an estimated weight of ± 0.12ct.
- All color stone weights are approximate since stones are not removed from their mounts to preserve the integrity of the setting.