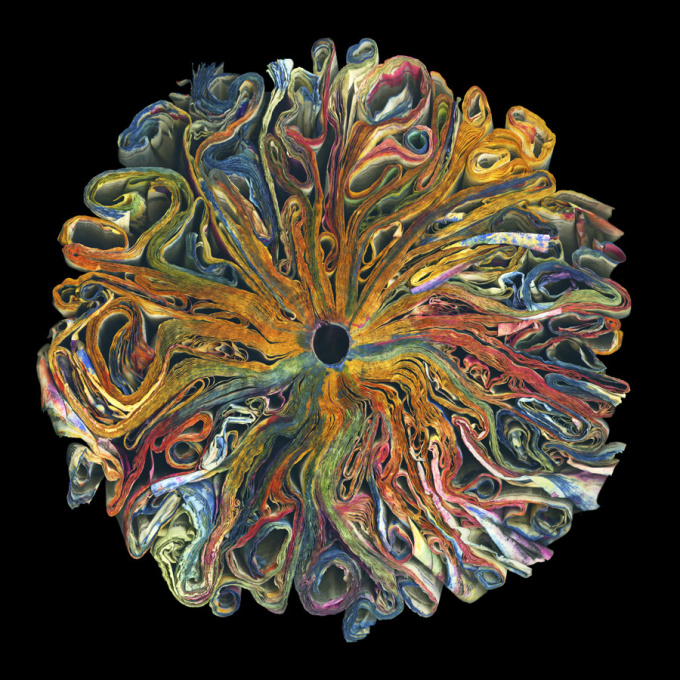 Cara Barer is an American photographer who bases her practice in Houston, Texas. Barer visually documents the way in which society has come to retrieve information by changing a common reference book into a work of sculpture. In her experimentation with curling irons, clothes pins and water, Barer transforms volumes of irrelevant and outdated information into coiled, crumpled objects of beauty.

By photographing each object as the last step in her creative intervention, Barer affords a second life to the cast-off books and paper she re-reinterprets in her work. Fanciful and symbolic, Barer’s photographs allude to the status of the book in the contemporary digital age, while offering an open narrative for each viewer to contemplate through her abstract compositions. My photographs are primarily a documentation of a physical evolution. I have changed a common object into sculpture in a state of flux. The way we choose to research and find information is also in an evolution. I hope to raise questions about these changes, the ephemeral and fragile nature in which we now obtain knowledge, and the future of books.

I arrive at some of my images by chance. Others, through experimentation. Without these two elements, my work would not flow easily from one idea to the next. A random encounter on Drew Street with the Houston Yellow Pages was the primary inspiration for this project. After that chance meeting, I began the search for more books, and more methods to change their appearance. I realized I owned many books that were no longer of use to me, or for that matter, anyone else. Would I ever need “Windows 95?” After soaking it in the bathtub for a few hours, it had a new shape and purpose. Half Price Books became a regular haunt, and an abandoned house gave me a set of outdated reference books, complete with mold and neglect. Each book tells me how to begin according to its size, type of paper, and sometimes contents.

As I begin the process, I first consider the contents of each volume. I didn’t spend more than a few seconds on “Windows 95,” but the “New Century Dictionary of the English Language,” is a treasure that, because of its fascinating illustrations, and archaic examples, saved it from taking on a new form. Sculpting segued to thoughts on obsolescence and the relevance of libraries in this century.

Half a century ago, students researched at home with the family set of encyclopedias, or took a trip to the library to find needed information. Now, owning a computer, and connecting to the internet gives a student the ability to complete a research paper without ever going near a library. I have fully embraced that technology, and would not want to be without it, but, I also fear that it is rapidly leading us to rely less and less on the reference books common in the last two centuries. With the discarded books that I have acquired, I am attempting to blur the line between objects, sculpture, and photography.
This project has become a journey that continues to evolve.

Cara Barer (b. 1956) is a contemporary artist who lives and works in Houston, Texas. She uses curling irons and water to manipulate outdated, abandoned and obsolete books which she then captures on camera. She graduated from the Art Institute of Houston in 1987. She also graduated from the University of Houston in 1981 and the Glassell School of Art in 1994. Her work has been shown in numerous exhibitions across the U.S. and is reproduced in several publications, including Art Made From Books: Altered, Sculpted, Carved (Chronicle Books, 2013). Her photographs can be found in collections such as VISA, UCLA Special Collections, Danielle Steel, Bloomingdale’s, Lehigh University, Nordstrom, Nationwide, Wells Fargo Bank and Museum of Fine Arts, Houston, among others.