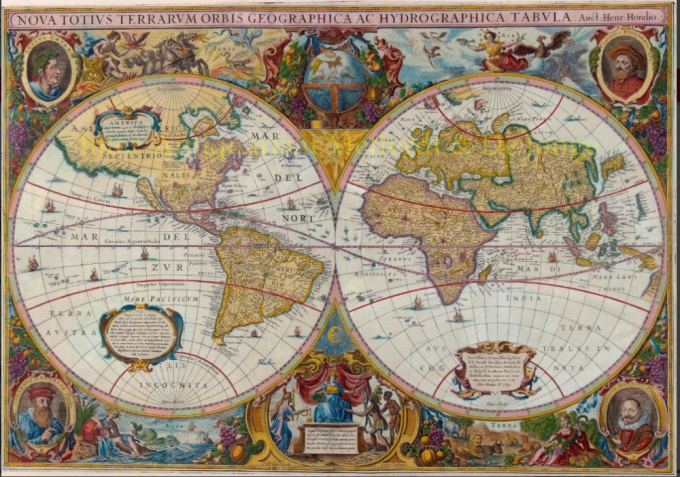 This is one of the most famous and most beautiful world maps from the first half of the 17th century. It was Hondius-Janssonius' reaction on the world map of competitor Blaeu. Henricus Hondius and his son-in-law Johannes Janssonius released a reissue in 1630 on the market of the atlas (father) Jodocus Hondius with maps by Gerard Mercator. After the death of Henricus Hondius, Janssonius continued with the publishing house and put his name on the copper plate of the world map.

The portraits in the corners of the engraving are (from the upper left, clockwise) Julius Caesar, Claudius Ptolemy (Greek geographer and astrologer, famous for his cards copied in the 15th century), Jodocus Hondius (cartographer and founder of the publisher) and Gerardus Mercator ('the father of modern geography' and teacher of Jodocus Hondius).

Around the eastern and western hemispheres we see the elements: the god Apollo in his chariot with Phoenix and fire-breathing dragons depict fire (Ignis), the goddess Diana with birds and the wind as imagination of the sky (Aer), the goddess Abundantia with animals and the horn of plenty, the earth (Terra), and Aquarius with water jug, shells and fish represent the water (Aqua). In the middle at the top, we see a celestial globe and the sun, at the bottom of the moon and a mythological Europe get gifts from Asia, America and Africa.

The map is the first atlas map showing California as an island and has one of the earliest views of the northwest coast of Australia.

Jodocus Hondius and Jan Janssonius founded a publishing business in the 1630s.
They published atlases as Mercator/Hondius/Janssonius.

Under the leadership of Janssonius the Hondius Atlas was steadily enlarged. Renamed Atlas Novus, it had three volumes in 1638, one fully dedicated to Italy. 1646 a fourth volume came out with "English County Maps", a year after a similar issue by Willem Blaeu. Janssonius' maps are similar to those of Blaeu, and he is often accused of copying from his rival, but many of his maps predate those of Blaeu and/or covered different regions. By 1660, at which point the atlas bore the appropriate name "Atlas Major", there were 11 volumes, containing the work of about a hundred credited authors and engravers. It included a description of "most of the cities of the world" (Townatlas), of the waterworld (Atlas Maritimus in 33 maps), and of the Ancient World (60 maps). The eleventh volume was the Atlas of the Heavens by Andreas Cellarius. Editions were printed in Dutch, Latin, French, and a few times in German.